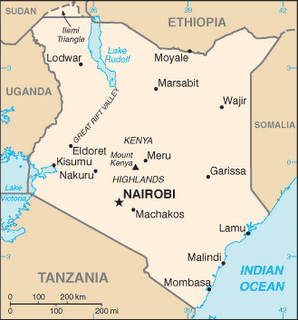 The agreement gives China National Offshore Oil Company (CNOOC) an exclusive, 20-year right to search for oil in six somewhat risky blocks covering more than 100,000 square kilometers in the Indian Ocean area. No oil is presently produced in the areas.

Officials from both countries did not give details of the oil pact, which was not mentioned in a joint statement listing agreements signed during Hu's visit.

The statement said that China would give Kenya a modest $7.5 million (60 million yuan) aid grant as part of an economic and technical cooperation package.

Additional grants will be made for anti-malarial medicine and rice; and China promised to maintain a sports stadium in Nairobi, help carry out studies to rehabilitate Nairobi roads, and provide educational opportunities for Kenyan students.

In addition to the right to explore in the offshore areas, Kenya gave China a public expression of support for its sovereignty claim over breakaway Taiwan.

Reading from the joint statement, Kenyan Foreign Minister Raphael Tuju reiterated Kenya's position that the island belongs to the People's Republic of China.

"The Kenyan government expressed its opposition to Taiwan independence in any form and expressed its support for China's efforts to realize national reunification," he said. "The Chinese side highly appreciated the position of the Kenyan side."

Kenya and other African countries are eager for investment from China, which offers aid without demands for good governance, unlike the United States and other Western donors.

"We pursue a policy and ... the principle of non-interference in others' internal affairs," Hu told reporters.

As shown by today's developments, China is moving to consolidate its involvement in East Africa in a stepped-up effort to extract resources to fuel its booming economy.

Using a favorite expression, Hu told reporters in Nairobi that China's economic dealings with Kenya and other African countries are based on "win-win" outcomes, with both countries mutually benefiting from the arrangement.

In Nigeria, Hu proposed a "strategic partnership" with Africa; and Nigeria's president indicated that he sees Beijing as the coming superpower, an alternative to US power and influence in the world (see story below).

Kenya was the final stop of a tour that took China's president to the US, where he met with President George Bush; Saudi Arabia, where he signed energy and security cooperation agreements; Morocco; and Nigeria.

Energy-hungry China's global quest for oil and other raw materials clearly concerns the US. Bush administration officials make no secret of their view of China as an increasingly aggressive competitor and potential adversary.

Posted by Confidential Reporter at 11:52 AM