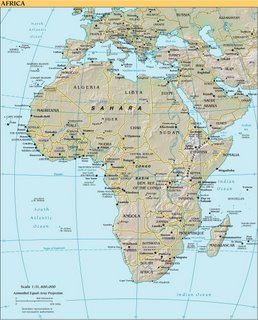 While China's North Korean vassal menaced the United States and Japan with a threatened missile launch this week, China's Prime Minister Wen Jiabao conducted a five-day, seven-nation tour of Africa that showcased his country's competitive advantages over the United States and other Western countries.

The trip was a model of modern-day mercantilism--with Chinese characteristics. It followed the three-nation African tour of Chinese President Hu Jintao in April and Beijing's release in January of a paper proposing a "strategic relationship" with Africa, and proclamation of 2006 as the "Year of Africa."

A reporter needed a scorecard to keep up with the deals emanating from Wen's whirlwind safari, including: natural gas and telecommunications agreements in Egypt; telcom and hydroelectric loans to Ghana; an array of economic and commercial cooperation arrangements with the Republic of Congo (Brazzaville); tantalizing new credit lines for Tanzania and Uganda; 14 accords with South Africa, covering textiles, trade, mining, and civilian nuclear technology; and fresh loans and expanded technical assistance for Angola--one of the continent's most corrupt countries--which recently overtook Saudi Arabia as China's biggest oil supplier. The Angola stopover cemented last month's $1.4 billion deal between China's giant, state-owned Sinopec and Angola's Sonangol to develop new oil fields.

Key words: state owned. In contrast with Western countries, booming China is using state-owned companies in its global pursuit of raw materials--especially oil--and markets. The companies answer to China's ruling Communist Party, not stockholders, even if some of the firms have sold minority stakes to investors in order to float and list shares in Hong Kong or New York.

Like Chinese capitalism--or Chinese socialism, for that matter--the state-owned behemoths that have gone public only resemble the real thing. Commissar-style spies and executives are assigned to every company to watch over senior management; and the State-Owned Assets Supervision and Administration Commission of the State Council, which holds controlling interests in roughly 200 large Chinese companies, monitors performance.

Even to talk in terms of competition between Chinese and US companies is to miss the point. China's state-owned companies are tools of the state. The companies do not invest overseas simply to make money; rather, they invest to augment the power of the state and support state policies. In Africa, this mainly means investing (a) to lock in longterm access to oil and minerals, and (b) to open up and expand markets for cheap Chinese goods.

China's investment, trade--and flag--are all wrapped up in a single package; one does not follow the other. Economic aid, including grants, loans and credits, and various forms of technical assistance, go hand in hand with commitments to develop oil fields and build refineries, roads, and railroads. Prestige projects--a presidential palace here, a football stadium there--are also offered, along with no-strings arms deals--apart from promising to support China's position on Taiwan--regardless of a given country's human rights record or transparency rating.

All told, Africa is now home to nearly 1,000 Chinese investment projects. Several were only recently announced, including investment of $4 billion in oil refinery and power generation projects in Nigeria--in exchange for four oil exploration licenses--and an agreement to develop a huge, untapped iron ore deposit in the Congo.

And the Year of Africa is only half-over.

Posted by Confidential Reporter at 2:26 AM