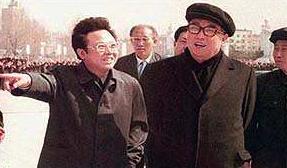 China Confidential continues to believe that a North Korean nuclear bomb test could occur on or around October 9. There are signs of suspicious activity at possible test sites; and Dear Leader Kim Jong-il, as we have previously noted, would like to upstage the United Nations Security Council when it meets next Monday to formally endorse South Korean Foreign Minister Ban Ki-Moon as its choice to become the next UN secretary general.

Following in the footsteps of his late father, Great Leader Kim Il-sung, the current Kim has vowed to reunify the Korean peninsula.

This, too, should be considered: North Korea timed its provocative July 4 missile tests to coincide with America's Independence Day festivities. The US will celebrate Columbus Day next Monday, commemorating the arrival in the New World by explorer Christopher Columbus in 1492, though it is not known if Kim is aware of the holiday. On the other hand, his hatred of the US could inspire him to try to connect a dramatic, defiant act to a holiday that has been increasingly controversial in recent years. Native American and other groups say the day signifies the onset of the genocidal conquest of the Americas by Spanish conquistadors. In this vein, Venezuela has renamed the holiday Día de la Resistencia Indígena--Spanish for Day of Indigenous Resistance.

Venezuela's anti-American, populist president, Hugo Chavez has expressed support for both North Korea and Iran in their nuclear standoffs.

So much for speculation about next Monday. The reclusive Kim might also decide to wait until next Friday--the 13th--to explode hs weapon. A fanatic film buff who is said to own the world's largest library of porno-flicks, Kim's tastes reportedly include action adventure and espionage thrillers--James Bond is his absolute favorite--as well as horror and slasher films.

Finally, there is the possibility that Dear Leader could time a nuclear test to coincide with US Congressional elections in early November.

Nobody knows--maybe not even Kim. He could be waiting to make up his mind. One thing is certain, however: it is extremely unlikely that he is bluffing.

Again, we expect an explosion to take place sooner rather than later.

Posted by Confidential Reporter at 2:10 PM