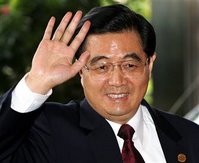 If it's Thursday, this must be Mozambique.

Chinese President Hu Jintao signed a series of bilateral agreements Thursday during a visit to Mozambique, cancelling about $20 million in public debt to China (on which no interest was being paid) and promising expanded bilateral trade.

Hu, who is on a 24-hour state visit to Mozambique as part of a tour of eight African countries, announced the agreements after official discussions with Mozambique President Armando Guebuza.

The two leaders signed a range of deals on agriculture and other trade initiatives. China also promised to help Mozambique build schools and a national stadium.

Hu told reporters that the number of export goods that can enter China from Mozambique duty free has risen from 190 to 442. However, no list of these goods is yet available.

Trade between China and Mozambique has been growing quite rapidly. Hu said it is now worth $210 million a year, which is six times the figure for 2001.

Mozambique reaffirmed its commitment to Beijing's sacrosanct one-China policy, and its opposition to "Taiwan independence" in any form, according to a joint communique.

It was Hu's second-to-last stop on his eight-nation African tour.

Over the past two weeks, the Chinese president has visited Cameroon, Liberia, Sudan, Zambia, Namibia and South Africa. In each of the nations, he has announced new aid from China or signed economic agreements.

Hu is scheduled to end his tour in Seychelles Saturday.

Speaking in South Africa Wednesday, Hu dismissed concerns that Beijing is developing a neocolonialist relationship with Africa in its drive to tap natural resources for its energy-hungry industries.

Which, as readers of this blog well know, is a lot of hooey.
Posted by Confidential Reporter at 8:28 PM