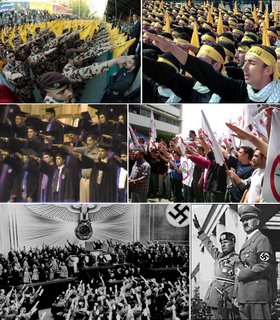 In the wake of its Holocaust denial conference and Holocaust cartoon contest, mass-murdering Islamist Iran is forming an antisemitic international, the likes of which the world has not seen since the Nazi era.

An international institute for Holocaust denial will be the centerpiece of this evil enterprise, highlighting a new level of cooperation between neo-Nazis and the nuclear-arming Iranian mullahocracy.

The usual suspects--such well-known neo-Nazis as Bernhard Schaub of Switzerland, Serge Thion of France, and Australia's Fredrick Toben--are expected to play important roles. Mohammad Ali Rahim, an advisor to Iranian monster-in-chief Mahmud Ahmadinejad, will act as general secretary of the institute, which will be based in Tehran.

Iran, since the fall of the pro-Western, modernizing Shah, has become a center for organized international Holocaust denial and has helped elevate the endeavor from fringe hate speech to a state-approved pseudo-intellectual debate. Iran has also become a refuge for the biggest names in European Holocaust denial, including: (1) Jurgen Graf, who was sentenced in Switzerland to 15 months in prison for Holocaust falsification, before fleeing to Tehran, and (2) Austrian Holocaust denier Wolfgang Frohlich, who testified as a so-called expert witness during Graf's 1998 trial. This saved Frohlich from Austria's severe anti-Holocaust denial statutes. Frohlich argued that evidence proved no Jews were killed by gassing.

The website of the United States-based, Holocaust-denying Institute for Historical Review (IHR) states that "Iran's official radio voice to the world, IRIB, has in recent years expressed support for Holocaust revisionism by broadcasting sympathetic interviews with leading revisionist scholars and activists (including) IHR Director Mark Weber ... and Ernst Zundel." The latter is a German Holocaust denier and pamphleteer who was jailed several times in Canada.

IHR further states that the "editorial, 'Myth of the Holocaust,' in the English-language Iranian paper Kayhan International, Dec. 6, 1999, commented sympathetically on Holocaust revisionism, and criticized German government persecution of Dr. Fredrick Toben and others who dispute Holocaust claims."

Iranian-Nazi ties are deep and disgusting. About 600 Iranian journalists and 160 members of the Iranian parliament have signed petitions supporting Roger Garaudy, who was fined $40,000 by French authorities for his book claiming the Holocaust was a myth. When Garaudy landed in Iran, the country's supreme spiritual leader, Ayatollah Sayyad Khamenei, granted him an audience and lauded his work.

Other neo-Nazis who have found Iran an especially welcoming and sheltering place include David Myatt, a founder of the British National Socialist Movement (NSM), who has been jailed for racist attacks, and has changed his name to Abdul Aziz ibn Myatt following his reported conversion to Islam. Myatt supports the killing of any Muslim who breaks his oath of loyalty to Islam, and the setting up of a Muslim superstate. He encourages Neo-Nazis to convert to Islam, arguing that Islam is the best hope for combating Zionism and the West.

A number of so-called traditionalist Catholics have also visited Iran and shown support for the regime in its nuclear impasse with the West. The Holocaust-denying Catholic splinter group--which includes actor Mel Gibson's father, Hutton Gibson--rejects many of the Vatican's core teachings and essentially views every Jew as an enemy of Christ. There is evidence of growing cooperation between the movement, which seems to be on the rise in the US and Europe, and white supremacist hate groups.

The brain behind the Islamist-neo-Nazi alliance is an elderly, mysterious Swiss-German financier straight out of central casting. His name is Ahmed Huber (nee Albert Huber). A former journalist who converted to Islam, Huber has been linked by US and European law enforcement and intelligence agencies to Al Qaeda, which he publicly praised after 9/11. He has also admitted meeting with Binladen followers.

Huber is a longtime leader of the Avalon Gemeinschaft, a secret fraternity whose members include aging former Waffen-SS volunteers and younger radicals, such as Germany's Horst Mahlet, Jurgen Graf, and and the Swedish-based Ahmad Rami, a former Moroccan military officer.

Huber's Muslim project dates to the late 1950s, when he publicly cast his lot with secular pan-Arabists, including Egyptian leader Gamal Abdel Nasser, who offered Nazi war criminals safe haven and hefty salaries in exchange for their help on "Jewish affairs." In the wake of Egypt's military defeats in both the 1967 and 1973 Arab-Israeli wars, and after Nasser's successor, Anwar Sadat, signed a peace accord with Israel, and Khomeini toppled the Shah, Huber embraced Islamist Iran. In 1982, he wrote an essay for a book entitled "Der Unbekannte Islam" ("The unknown Islam") that identified Zionism, Judaism, and America as Islam's implacable enemies. He often asserts that Hitler regarded Islam as the one true religion.

Huber's work recalls Iran's axis with the Third Reich, which began during the prewar years, when it welcomed Nazi Gestapo officers and other operatives to Tehran and allowed them to use the city as a base for Middle East agitation against the British and the region's Jews. The leading Tehran-based Nazi was Fritz Grobba, Berlin's envoy to the Middle East, who was often called "the German Lawrence," because he called for creation of a pan-Islamic state stretching from Casablanca to Tehran.

Relations between Berlin and Tehran strengthened when Hitler came to power in 1933. The then-Shah, Reza Pahlavi, sought the Reich's help in reducing British petro-political domination of Persia, which the Shah renamed Iran in 1935. Iran in Farsi means Land of the Aryans and refers to the Proto-Indo-European lineage that Nazi racial theorists cherished.

The abortive 1941 pro-Nazi coup in neighboring Iraq was planned in Iran. After the British booted the Nazis out of Baghdad in June 1941, German aircrews supporting Nazi bombers escaped across Iraq's northern border into Iran.

The pro-Nazi Grand Mufti of Jerusalem, Haj Amin al-Husseini, a Sunni religious leader, was smuggled across the border to Tehran, where he continued to call for the destruction of the Jews and the defeat of the British--and for Jewish refugees to be shipped to the gas chambers of Nazi-occupied Poland.

The same gas chambers that the Mufti's spiritual heirs and their neo-Nazi allies would one day deny.

In October 1941, British, Soviet other allied forces invaded Iran to break up the Iran-Nazi alliance. Pro-Nazi generals and ministers were arrested, and the Shah's son was installed in power. (In contrast with his father, Mohammed Reza Pahlavi befriended Iran's Jewish community and covertly allied his country with Israel.) 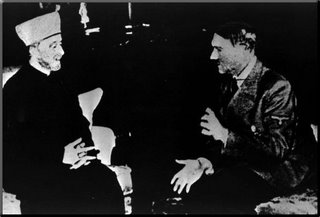 The Mufti escaped to the Italian embassy, and was allowed to leave Iran along with the rest of the Italian delegation. He landed in Berlin, where he met with Hitler, established his own Reich-backed bureau and was given airtime on Radio Berlin in order to agitate for international Jewish destruction, as well as a pan-Islamic alliance with Nazi Germany.

The Mufti called upon all Muslims to "kill the Jews wherever you see them." He raised three divisions of Islamic Waffen SS, including Iranian Nazis, to massacre Jews in Bosnia.

After the war, the Mufti fled to Switzerland, was detained and put under house arrest in France, but escaped and was given asylum in Egypt, where he established a terrorist apparatus that was responsible for the assassination of jordanian King Abdullah in 1951.

The British declined to have the Mufti arrested and tried as a war criminal out of fear of antagonizing a hero of Arab and Muslim extremism. He died in Beirut, Lebanon in 1974.

Testimony presented at the Nuremberg trials accused the Mufti of not only having knowledge about the Holocaust but of also actively encouraging the initiation of extermination programs against European Jews.

Adolf Eichmann's deputy Dieter Wisliceny (who was subsequently executed) testified at his 1946 war crimes trial: "The Mufti was one of the initiators of the systematic extermination of European Jewry and had been a collaborator and adviser of Eichmann and Himmler in the execution of this plan... He was one of Eichmann’s best friends and had constantly incited him to accelerate the extermination measures. I heard him say, accompanied by Eichmann, he had visited incognito the gas chambers of Auschwitz."

A postscript: The idea for the 1935 Iranian name change was supposedly suggested by Tehran's ambassador to Germany, who came under the influence of Hitler's trusted banker, Dr. Hjalmar Schacht. Similarly, there is reason to believe that the idea for Iran's Holocaust-denying initiative came from the neo-Nazi financier Ahmed Huber.
Posted by Confidential Reporter at 11:37 PM