End Islamism Before it Ends Us 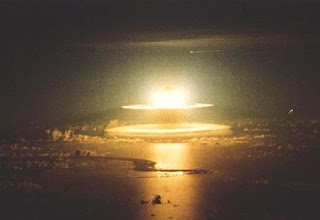 "Make war upon such of those to whom the Scriptures have been given as believe not in God, or in the last day, and who forbid not that which God and His Apostle have forbidden, and who profess not the profession of the truth, until they pay tribute out of hand, and they be humbled."
-From the Koran, Sura 9:29

While Iranian and Saudi scum plot our doom, traitors and appeasers in our midst go about their pefidious business. America's foreign policy establishment, entertainment elite, media moguls, and academic a-holes are tripping over themselves and each other to appease and accomodate Radical Islam--and betray the West. Perhaps the Fifth Column thinks it will be spared the sword when the Islamist filth finally take over.

All the more reason to attack--and annihilate--the Iranian regime as soon as possible, using any and all necessary means, including tactical nuclear weapons. (Scroll for the stories.) These earth penetrating, bunker busting bombs are almost certainly necessary to utterly destroy every nuclear, missile, chemical and biological weapons site, known or suspected. TNWs are probably also necessary for wiping out Iran's war-making capabilities for decades to come.

End the Iranian menace--and Radical Islam--before they end us.
Posted by Confidential Reporter at 7:57 PM