Memo to the Media 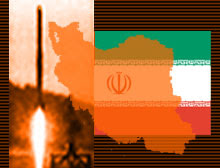 1. Moderate: Mullahocracy member or supporter who wants to acquire nuclear weapons but is willing to slow down or stop Iran's suspect nuclear enrichment program in order to preserve the peace and reserve the option of resuming nuclear development when conditions allow. A moderate may also believe in surreptitiously acquiring an atomic warhead or two--or a few crude nuclear or radiological (dirty) bombs--from North Korea and other rogue suppliers.

2. Extremist: Mullahocracy member or supporter who is unwilling to compromise--and ready to risk war with the United States--over the nuclear issue.
Posted by Confidential Reporter at 7:55 AM