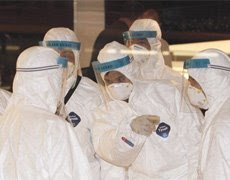 China and Mexico are at odds over China's decision to quarantine Mexican nationals to stop the spread of swine flu. Click here, here, and here for the coverage, and here for an up-to-date report on related worldwide developments. Mexicans are being isolated in hotels in both Beijing and Hong Kong.

In other swine flu developments, a possible Catholic connection to the spread of the disease has caused concern among church-attending Catholics in the United States and in predominantly Catholic Spain, which leads Europe in confirmed cases. The Eucharist, also called Holy Communion, which is part of the Catholic Mass, is a ceremony that includes receiving a consecrated piece of bread or wafer and a sip of wine from a communal cup--representing the body and blood of Jesus Christ as instituted by Jesus at the Last Supper. In contrast with the Catholic rite, some Protestant denominations distribute the ceremonial Eucharist wine in small, individual cups.

Students at a Catholic prep school in New York City, who had visited Mexico during "spring break" holiday, first brought the swine flu to the U.S. So there is understandable concern that the ceremony may have facilitated the spread of the illness.

It is possible that Church authorities may advise temporarily skipping the shared wine during the Holy Communion ceremony.

The United States Conference of Catholic Bishops has published a Web page about the subject, which may found here.
Posted by Confidential Reporter at 11:49 AM