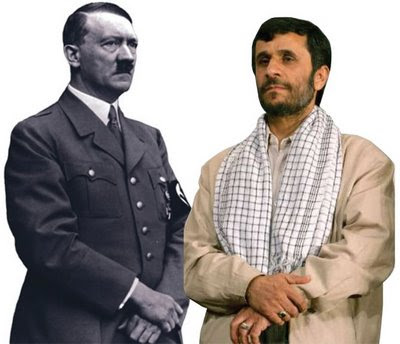 Click here for the report. The fascist murderers have just begun their monstrous work. China Confidential analysts say the regime plans to execute hundreds of innocent people; countless detainees will be systematically tortured, beaten, and jailed for years.

The pro-appeasement Obama administration's abandonment of the democracy-seekers will be remembered as both an inexcusable betrayal and a terrible strategic blunder, comparable to the catastrophic Carter administration's betrayal of Iran's pro-American, modernizing monarch, Shah Mohammed Reza Pahlavi.

Regime change is the key to ending Iran's nuclear arms program. Regime change is also the key to peace in the Middle East. The turbaned tyrants' Hitlerian proxies--Hamas and Hezbollah--cannot prevail without Iranian money and weapons.

Barring a revolution--now is the time for sane commanders of the regular armed forces to make their move--the regime must be isolated and eliminated. Swift, merciless, crushing attacks on all suspect nuclear and missile sites--and the utter destruction of the Iranian Revolutionary Guards Corps--are urgently needed. The fighters for freedom will know what to do with the missile-mad mullahs, the atomic ayatollahs, and the dreaded Basij militia. Hanging is too good for them....

Prediction: when Iran's hour of liberation ... the real revolution ... finally comes ... when the people rise up and sweep away the Islamist scum for once and all ... the President of the United States ... supposed leader of the free world .... will speak out forcefully in defense of the ... Islamofascists ... and call for an end to violence and fair and humane treatment for those who have for three decades enslaved a great nation.

POSTSCRIPT: Roger L. Simon's piece on Obama and fascism is must reading.
Posted by Confidential Reporter at 3:27 PM