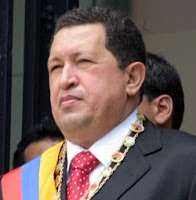 In case you missed the news, Venezuela plans to at least double the number of tanks in its military as part of a broader effort to strengthen its defenses.

“We are going to bring ... several new tank battalions to have an armoured force at least twice the size of what we have today,” the Crackpot of Caracas said in a televised ceremony with military officials.

The announcement came days after Colombia said it was negotiating a deal with Washington to allow more U.S. troops to be deployed on three military bases in the Andean nation. Chavez sharply criticized the move, saying it posed a serious threat to Venezuela.

“The presence of these Yankee troops in Colombia will cause more problems,” Chavez said. “We’re obliged to review our relations with Colombia. The things we buy from Colombia, we’ll have to buy them elsewhere."