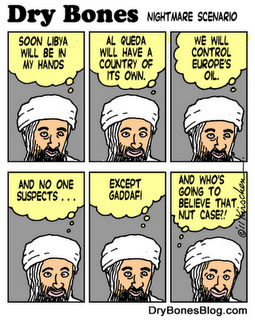 Regarding Benghazi, the real foreign policy scandal isn't that the administration lied about what happened, which was obvious from day one, or that security at the U.S. facilities was practically non-existent, or, even, that for all the billions of dollars spent on national defense, the Pentagon wasn't able to scramble armed units in time to save U.S. diplomats and support personnel from being slaughtered by barbaric, Third World terrorists and mobs.

All that, bad as it is, pales in comparison with the much larger scandal--namely, that the United States needlessly intervened in Libya in the first place and that the intervention resulted in destabilizing--and Islamizing--a completely contained, former secular enemy that had become an important asset in the fight against Islamism (rightwing political Islam).

In other words, the real scandal is President Obama's pro-Islamist foreign policy, that is to say, his overt alignment of the U.S. with Islamism and overlapping organized Islam under cover of diplomatically engaging (collaborating with) all Islamist regimes and groups with the exception of Al Qaeda, and, in a clear nod to Islamist ideology, an odious embrace of ("outreach to") what he insists on calling "the Muslim world."