White House: 'Historic partnership, which began in the 18th century, continues to thrive well into the 21th century.' 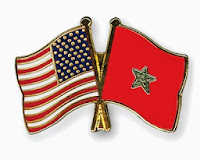 A joint written statement said they discussed "the opportunity to map out a new and ambitious plan for the strategic partnership" and advancing shared priorities of a secure, stable, and prosperous Maghreb, Africa, and Middle East.

On democratic reforms in Morocco, the statement said they discussed the "promise of Morocco's 2011 constitution and ways the United States can help strengthen Morocco's democratic institutions, civil society and inclusive governance."

Obama, according to the statement, welcomed the king's commitment to end the practice of military trials of civilians and both reaffirmed their commitment to the U.N. human rights system.

They also discussed the threat of violent extremism in the region, and pledged to deepen civilian and military cooperation in counterterrorism and non-proliferation.

On Western Sahara, they affirmed their shared commitment to improving the lives of the people of the Western Sahara and agreed to work together to continue to protect and promote human rights in the territory.

Obama pledged to continue to support efforts to find a peaceful, sustainable, mutually agreed-upon solution to the Western Sahara question.

A separate White House release called Morocco one of America's closest counterterrorism partners in the Middle East and North Africa region and praised it for implementing a comprehensive counterterrorism strategy.

The White House also praised Morocco's contributions to international peacekeeping operations in places like the Democratic Republic of Congo and Côte d’Ivoire, and the NATO KFOR mission in Kosovo.

The full text of the joint statement appears below.

In their meeting today at the White House, President Obama and His Majesty King Mohammed VI reaffirmed the strong and mutually beneficial partnership and strategic alliance between the United States and the Kingdom of Morocco.  The two leaders stressed that this important visit provides an opportunity to map out a new and ambitious plan for the strategic partnership and pledged to advance our shared priorities of a secure, stable, and prosperous Maghreb, Africa, and Middle East.   The two leaders also emphasized our shared values, mutual trust, common interests, and strong friendship, as reflected throughout our partnership.

Support for Democratic and Economic Reforms

The President commended the action and the leadership of His Majesty the King in deepening democracy and promoting economic progress and human development during the past decade.  The President and His Majesty the King reaffirmed their commitment to work together to realize the promise of Morocco’s 2011 constitution and explore ways in which the United States can help strengthen Morocco’s democratic institutions, civil society, and inclusive governance.  The President welcomed the King’s commitment to end the practice of military trials of civilians.  The two leaders reaffirmed their commitment to the UN human rights system and its important role in protecting and promoting human rights and fundamental freedoms, and committed to deepening the ongoing U.S.-Morocco dialogue on human rights, which has been a productive and valuable mechanism for the exchange of views and information.  Noting their shared concern about migrants, refugees, and human trafficking issues worldwide, the President expressed support for Morocco’s initiative to reform its asylum and immigration system based on recommendations from Morocco’s National Human Rights Commission.  The President welcomed Morocco’s intent to take concrete steps to qualify for and join the Open Government Partnership and to realize the vision of the Equal Futures Partnership by ensuring women fully participate in public life, and that they lead and benefit from inclusive economic growth.

The two leaders emphasized that the United States and Morocco are dedicated to working together to promote human and economic development in Morocco.  They noted the successful conclusion, in September 2013, of Morocco’s first Millennium Challenge Compact, and the Compact’s positive impact on job creation, economic growth, and human development throughout Morocco.  The President highlighted the U.S. Agency for International Development’s new development strategy for 2013-2017, designed to help the Moroccan government achieve its reform goals and respond to the needs of Moroccan citizens.  This strategy focuses on:  enhancing the employability of youth; increasing civic participation in governance; and enhancing educational attainment for children at the primary level.

They noted that the two countries signed a Customs Mutual Assistance Agreement on November 21, 2013 to expand bilateral cooperation on the detection of money laundering, trade fraud, and other financial crime.  Additionally, on November 21, 2013 the United States and Morocco signed a Trade Facilitation Agreement that furthers the U.S.-Morocco Free Trade Agreement and represents a forward-leaning, 21st century agreement on customs reform and modernization.  Morocco is our first partner in the region to conclude such an agreement, as well as to endorse joint principles on investment and information communication technology services trade.  These important initiatives reflect our common commitment to building stronger economic ties with and among the region.

The President and His Majesty the King recognized the importance of Morocco as a trade and investment platform for North Africa and Sub-Saharan Africa and the benefits of maintaining an attractive business climate for investment in Morocco.  Building on the December 2012 U.S.-Morocco Business Development Conference in Washington, DC, the King noted that planning is underway for a second such Conference to be held in Rabat in 2014.  The 2014 Business Development Conference aims to build on business-to-business contacts in aviation, the agriculture and food industry, and energy to expand trade and promote investment, as well as regional economic integration.  The President expressed appreciation to the King for offering to host the 2014 Global Entrepreneurship Summit, and both leaders highlighted the importance of fostering broad-based economic opportunity in the region, particularly for young people and women.

Applauding their people-to-people ties, the President and His Majesty the King are committed to exploring further cooperation to promote mutual understanding and interfaith dialogue in Morocco and throughout the region.  They reiterated their commitment to enhance and diversify exchange programs that include the Moroccan American Commission for Educational and Cultural Exchange.  The President and His Majesty the King underscored the importance of early ratification and implementation of the agreement between the two countries on the registration and status of the system of American schools in Morocco.  Both leaders committed to strengthening ties and increasing mutual understanding between Moroccan and American youth.  The President commended His Majesty the King for graciously committing to donate $1 million per year over the next 5 years to the J. Christopher Stevens Virtual Exchange Initiative, which hopes to connect youth from all different age groups in the Middle East and North Africa with youth in the United States through virtual exchange.

The Issue of the Western Sahara

The President pledged to continue to support efforts to find a peaceful, sustainable, mutually agreed-upon solution to the Western Sahara question.  U.S. policy toward the Western Sahara has remained consistent for many years.  The United States has made clear that Morocco’s autonomy plan is serious, realistic, and credible, and that it represents a potential approach that could satisfy the aspirations of the people in the Western Sahara to run their own affairs in peace and dignity.  We continue to support the negotiations carried out by the United Nations, including the work of the UN Secretary-General’s Personal Envoy Ambassador Christopher Ross, and urge the parties to work toward a resolution.   The two leaders affirmed their shared commitment to the improvement of the lives of the people of the Western Sahara and agreed to work together to continue to protect and promote human rights in the territory.

The leaders noted their partnership on the United Nations Security Council over the past two years in the advancement of international peace and security, including in Mali, the Sahel, Syria, Libya, and the Middle East.  They reaffirmed their commitment to continue to deepen civilian and military cooperation in the areas of non-proliferation and counter-terrorism.  To address their deep concern for the continuing threat posed by terrorism, the United States and Morocco intend to continue cooperation to bolster democratic criminal justice institutions and to counter the threat of violent extremism in the region.  The leaders also reinforced their commitment to regional cooperation initiatives.

The leaders are committed to continuing close cooperation in the Global Counterterrorism Forum and to work to strengthen regional political, economic, and security ties across North Africa and the Sahel, including through a reinvigorated Arab Maghreb Union and other regional forums.

The President encouraged Morocco to join the United States in founding the International Institute of Justice and the Rule of Law in Malta, which intends to train a new generation of criminal justice officials across North, West, and East Africa on how to address counterterrorism and related security challenges through a rule of law framework.

His Majesty the King thanked the President for the importance given to the promotion of social development and economic prosperity within Africa. The President acknowledged His Majesty the King’s leadership and the actions carried out by Morocco in the field of peace keeping, conflict prevention, human development, and the preservation of cultural and religious identity.

In this context, both countries committed to explore joint initiatives to promote human development and stability through food security, access to energy, and the promotion of trade based on the existing Free Trade Agreement.  The two Heads of State were pleased to note their common assessment of the critical role of human and economic development in promoting stability and security on the African continent, and committed to explore in greater detail concrete options for pragmatic, inclusive cooperation around economic and development issues of mutual interest.

His Majesty commended the continuous commitment of the President and the efforts of the Secretary of State to advance Middle East peace.  The President acknowledged the contribution of His Majesty, Chairman of the Al Quds committee, to the efforts aiming to achieve a two state solution.

The President and His Majesty the King closed the meeting by emphasizing their shared commitment to the special and longstanding relationship between the United States and the Kingdom of Morocco, which in 1777 became the first nation to recognize the independence of the United States. President Obama and King Mohammed VI reaffirmed their commitment to stay in close contact and to continue on a path of increased cooperation that will strengthen the United States-Morocco strategic partnership, including the next meeting of the U.S.-Morocco Strategic Dialogue in Rabat.  They each intend to designate a senior official to lead the implementation of the commitments made today, and the President thanked His Majesty the King for his invitation to visit Morocco.  Today’s meeting demonstrates that the interests of the United States and Morocco continue to converge, and that this historic partnership, which began in the 18th century, continues to thrive well into the 21th century.

Click here for more details on key areas of US-Moroccan partnership and cooperation.

For the history of US-Morocco relations, see “The US and Morocco Share a Long History of Friendship."

Posted by Confidential Reporter at 6:05 PM