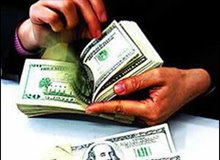 China has overtaken Japan as the world's largest holder of foreign exchange reserves.

A report in the state-owned China Business News Tuesday says the country has amassed nearly $854 billion in foreign currency assets.

Analysts say the reserves are growing quickly and might top $1 trillion by the end of this year.

The foreign currency flood comes from payments for China's surging exports. The country's trade surplus with the rest of the world was nearly $102 billion last year.

China's critics, including officials and lawmakers in the United States, accuse Beijing of keeping its currency, the yuan, artificially low to unfairly boost exports.

Two US senators, Lindsey Graham, a South Carolina Republican, and Charles Schumer, a New York Democrat, have sponsored a bill that would punish China for allegedly manipulating its exchange rate. But the Senators said Tuesday that they would postpone pushing their bill--which would slap a 27.5 percent tariff on all goods imported into the US from China--because they had detected encouraging signs of currency reform during their recent trip to China.

"Let me be clear: we expect continued progress on this issue," he said. "For the first time ever, the Chinese five-year plan says the currency should float. For the first time, they have put mechanisms in place that allow the currency to float, and we believe the progress we have seen in the last two or three weeks will continue."

Graham warned Beijing that he would not hesitate to call for a vote if currency reform slows in China over the next six months.

"If the Chinese renege on the efforts to reform their currency, they do so at their own peril," he said. "They will face the wrath of the Senate."

Graham added that he hopes Chinese President Hu Jintao will announce additional currency reforms when he visits Washington next month.

Posted by Confidential Reporter at 3:26 PM