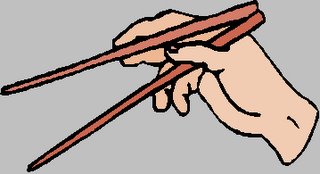 From chopsticks to cars--consumption taxes in China will increase as the government moves to protect its ravaged environment and reduce energy use.

China is one of the world's most environmentally unsound countries--and deforestation is a major problem.

Environmentalists warn that at the current rate of timber use, China will soon have no forests left.

Disposable chopsticks are a big part of the problem. Around 25 million trees are cut every year in China to produce some 45 billion disposable wooden chopsticks. Most are used in restaurants and canteens around the country. Approximately a third are exported to Japan, South Korea and other countries.

To discourage the use of throwaway chopsticks, the Chinese government announced on Wednesday it will impose a five percent tax on them, starting April first.

A small step in a thousand-mile journey? More or less, say Chinese environmentalists, for whom the cheap, ubiquitous utensils are a prime target. Activists contend that a tax increase will not deter people from using disposable chopsticks, and that more action is urgently needed.

"For example, maybe the government should take the leading role not to use the disposable chopsticks in the first hand, then the government will lead a very good model for the rest of the people and to the community," says Hahn Chu, who works with the Hong Kong branch of Friends of the Earth. "But now in China they only use the tax as a means or a tool to do it. It's not enough, just only a first and very small step."

Of course, there's more to the deforestation story than throwaway chopsticks. Production of commercial lumber is a major cause of deforestation in China. Another contributor is slash-and-burn agriculture, which destroys vast areas. More forests are mowed down to make way for railroads, highways, and high voltage lines; and forest fires take a huge annual toll.

As one observer puts it: "Anyone who travels in the west of China will soon encounter entire hillsides where the timber has been razed to the ground, or travel on roads where the trees on both sides have been felled for tens of kilometers."

Each year, an average of 2,460 kilometers km (950 square miles) of vegetated land in China deteriorates into desert and a additional million hectares of land suffers from serious land erosion.

China will soon be the leader in the global wood market. Increasing demand for wood products is putting pressure on forests in other countries. Much of China's timber imports come from countries where logging is poorly regulated.

So much for wood. Faced with growing pollution and energy shortages at home, China said it also will increase taxes on cars with high fuel consumption to encourage the production and use of more efficient cars. The top tax rate for cars with the largest engine will surge to 20 percent from eight percent. Tariffs on cars that have an engine capacity of less than a 1.5 liters will be cut to three percent.

Rising incomes in China's cities have spurred the sale of cars in recent years, making the country the third-largest auto market in the world. About half of the cars used have larger, 1.6 to two-liter engines.

The government said it also will tax a number of luxury goods--a move China's leaders hope will help narrow the gap between the rich and the poor in the country.

Buyers of luxury watches will face a 20 percent tax, while yachts, golf balls and golf clubs will be taxed at a rate of 10 percent. When the consumption taxes were imposed years ago, almost no mainlander would have thought of buying a yacht or playing golf, but economic development in the past 20 years have produced millions of wealthy Chinese.

Interestingly, Beijing will no longer tax soaps and shampoos. Considered luxury items a decade ago, they are now viewed as daily necessities.
Posted by Confidential Reporter at 9:15 AM