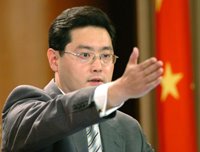 At a Tuesday briefing, Qin dismissed suggestions in the report that China might pose a challenge to US foreign policy.

"China is resolutely following a path to peaceful development," Qin said. "China has made its due contribution to push forward mutual development of peace and stability in the world."

Official Chinese figures show a double-digit increase in military spending over the past several years. But foreign experts say real military spending could be up to three times as high as the publicly released figures.

In an unusual linkage, the White House report also expresses concern about China's trade strategy, saying Beijing is trying to control markets instead of opening them up. The report says Beijing is acting as if it could "lock up" energy supplies around the world. It criticizes China's dealings with governments regardless of how they treat their people or behave internationally.

The Chinese spokesman also rejected a report by a United Nations torture investigator calling for extensive changes to China's police and court systems, in order to reduce what it called the "widespread" use of torture.

The UN report urges China to release political prisoners and to eliminate vague offenses such as "subverting state power," which are often used to prosecute political and religious dissidents.

Qin said much of the UN report's content was based on facts that had not been verified. He also said it exceeded the scope of the UN investigator's authority.
Posted by Confidential Reporter at 12:13 AM