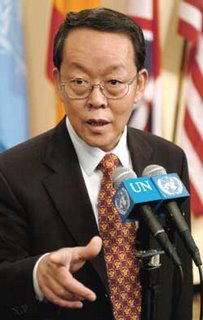 Efforts to bring United Nations Security Council pressure on Iran to curtail its nuclear ambitions have faltered in the face of stiff opposition from Russia and China--former rivals now increasingly aligned on international issues.

Britain and France are considering forcing a vote on the Iran issue.

Two weeks after the International Atomic Energy Agency (IAEA) referred Iran's controversial nuclear program to the Security Council, the council's five permanent, veto-wielding members are deadlocked on how to respond. The first preliminary step was to have been a statement listing Tehran's failures to comply with IAEA demands. The statement, drafted by Britain and France--with US support--urges Iran to suspend activities that could lead to nuclear weapons production.

But Russia and China object to large parts of the text. China's UN ambassador, Wang Guangya (seen above at a recent news briefing) told reporters Beijing and Moscow want a briefer document that concentrates on expressing support for the atomic energy agency.

"From the beginning, I proposed that if the Security Council is to support IAEA authority, it is to have a brief political statement," Wang said. "Support the IAEA, call on Iranians to cooperate, then put some pressure."

The full council was to have met Tuesday to consider adopting the statement by consensus. But the meeting was canceled when it became clear Russia and China would not budge.

Another meeting of the Council's so-called "Perm-Five" was held Wednesday to try to work out differences, but it too ended inconclusively.

The prospect of stalemate has prompted Western nations to consider replacing the statement with a resolution. While a statement requires support of all 15 Council members, a resolution could be adopted by a majority of nine.

That would force Russia and China to either approve or abstain--or kill--the measure by vetoing it.

British Ambassador to the UN Emyr Jones-Parry suggested that bringing the matter to a vote is a possibility. He said if there was no prospect of amending the text, efforts to do so would be abandoned.

French Ambassador to the UN Jean-Marc de La Sabliere told reporters he prefers a consensus statement, but would not rule out forcing a vote.

Senior US officials remain confident that agreement could be reached. Speaking to reporters during a visit to the Caribbean, Secretary of State Condoleezza Rice said: "Sometimes diplomacy takes a little bit of time but we are working very hard on it."

US President Bush said Wednesday it is important that Iran not be allowed to have a nuclear weapon. But he noted that diplomatic efforts are continuing.

"We're dealing with this issue diplomatically by having the Germans and the French and the British send a clear message to the Iranians, with our strong backing, that you will not have the capacity to make a weapon, to know how to make a weapon," Bush said.

A senior Iranian official Wednesday warned that US pressure on the Security Council to penalize his country for its nuclear policy would not succeed. News agencies quoted Iranian Foreign Minister Manouchehr Mottaki as saying what he called "the irrational American view" would not prevail in the council.

Iran has repeatedly denied it is trying to build nuclear weapons, saying its atomic program is for generating electricity.

But Western diplomats briefing reporters in recent days have said Iran is close to having 164 centrifuges. That would allow them to enrich uranium that could be used in weapons. One senior US official said if Tehran suddenly came into possession of several hundred pounds of highly enriched uranium, it could possibly produce a nuclear weapon within a year.
Posted by Confidential Reporter at 6:07 PM