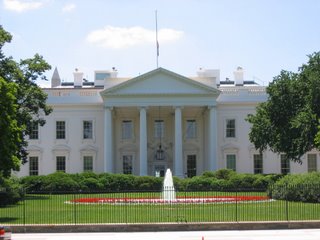 Beijing's bad behavior is no excuse for Washington's diplomatic incompetence.

That is how many people around the world--from sophisticated analysts to ordinary citizens--are certain to see Thursday's events in the capital of the United States, where a bumbling Bush administration appeared to go out of its way to ruin an important opportunity to improve relations between the world's most powerful nation and a rising rival representing more than a fifth of humanity.

We agree with that gloomy assessment, and urge the administration to take appropriate steps to correct the damage.

The background to the story is discouraging. Contrary to advice from older and wiser China hands--including, we are told, former Secretary of State Henry Kissinger, who was instrumental in orchestrating US President Richard Nixon's historic 1972 trip to China--the White House denied visiting Chinese President Hu Jintao the pomp and ceremony he wanted and deserved to make up for his ascending country's long history of political inferiority. Instead of entertaining Hu in style, administration officials, operatives, and ideologues followed through with their determination to use the symbolism surrounding Hu's visit as a means of signaling US displeasure with China's failure to make meaningful progress toward (a) narrowing the yawning bilateral trade deficit by seriously reforming China's managed currency system; (b) reducing, rather than escalating, tensions with self-ruled Taiwan; (c) increasing transparency in military affairs; and (d) liberalizing China's authoritarian political system.

But there is a huge difference between dealing with China's suspect policies and deliberately disrespecting the country. Much as we agree with the need to effectively and properly prod--or pressure--China into becoming a "responsible stakeholder" in the international community, to use a currently fashionable Bush team term, the administration's handling of Hu's visit was shocking in its insensitivity to the political needs and prestige of a nation that is both a powerful competitor and potentially dangerous adversary.

A word or two of explanation would seem to be in order. As China Confidential readers know, we are no fans of Hu and his repressive regime; and our pessimistic predictions for breakthroughs at the summit meeting have unfortunately been borne out by news reports. As journalists, however, we are sensitive to the difference between China bashing and responsible analysis and criticism, no matter how sharp. Regardless of our skepticism over Beijing's intentions toward its neighbors--and the US--and our critical coverage of China's atrocious human rights record, rank exploitation and oppression of its (always) left-behind rural poor and growing urban underclass, rejection of democratic ideals, relentless censorship of the Internet and traditional media, opaque military expansion and missile buildup opposite Taiwan, and cynical manipulation and instigation of popular anti-Japanese feelings--for who-knows-what-purposes--we fail to see the wisdom or usefulness of what the White House did, apart from attempting to placate politicians and citizens understandably upset over the effects of globalization on a hollowed-out US economy.

What, exactly, did the Bush administration do? First and foremost, it refused to elevate Hu's visit to the formal state visit status that China sought; instead of inviting Hu to a black-tie dinner at the White House, the administration treated him to lunch in the framework of several hours of discussions about the most important and contentious issues affecting relations between Beijing and Washington.

In other words, the White House welcomed Hu with a diplomatic slap in the face. It would have cost the White House nothing, in terms of political capital, to give Hu his state visit--and the Chinese know it. In fact, as diplomats the world over can attest, a well done state visit is a proven tool for softening hardened positions and setting a tone conducive for compromise and negotiation.

Making matters worse, an administration led by an unpopular president who has staked his administration's reputation and legacy on protecting post-9/11 America from further terrorist attacks--and has himself benefited handsomely from skilled crowd control and a series of carefully staged political events--proved to the world that the US is incapable of properly protecting a visiting head of state. Astonishingly, a Falun Gong heckler managed to mar a White House arrival ceremony--which was marked by unusually candid comments by Bush on US differences with China. The protestor, who used press cover to infiltrate the event, was able to shout and even threaten Hu ("Your days are numbered!" she yelled in Chinese) for several minutes before being dragged away by Secret Service agents.

US officials may argue that this sort of spectacle demonstrates the enduring vitality and inherent strength of American democracy; but, in the eyes of China and other nations, especially in the developing world, the alarming security snafu and close proximity of protestors must have appeared at best incredibly inept and at worst intentional.

And neither Bush's personal apology to Hu for the arrival ceremony incident, nor excuses and explanations citing US press freedom and the tradition of permitting protestors to assemble across the street from the White House are likely to help. Hu rose to power in a system distinguished by secrecy and intrigue. At the national political level in China, very little, if anything, happens without a reason. Administration officials will no doubt try their best to persuade the Chinese that disruptive protests are as American as the apple pie reportedly served for dessert at the White House lunch; but the country that has shown an ability to turn protest on and off like a faucet--as revealed by the rowdy anti-Japanese demonstrations that rocked Chinese cities only a year ago--will inevitably draw its own conclusions. Hu is considered a pragmatic centrist on relations with Washington; but there is no shortage of hardliners in Beijing who will seek to make hay (to use an old American expression) out of the way things played out for their president when he visited there.

It would be no exaggeration to say that the longterm consequences of Thursday's events for the US--and people everywhere yearning for a lowering of international tensions--could turn out to be both negative and significant.

Going forward, we respectfully suggest that President Bush and his top advisors--including Secretary of State Condoleezza Rice, who asserts the power of "transformational diplomacy" to spread democracy and freedom across the globe--might possibly benefit from consulting a classic world diplomacy text, Politics Among Nations: The Struggle for Power and Peace. Written by the late, preeminent American political scientist, Hans J. Morgenthau, and first published in 1948, early in the Cold War, the book includes some illuminating and still relevant sections on the importance of symbolism, ceremony, and prestige in international relations.

Of course, that which applies to diplomats also holds true for heads of state--only more so.