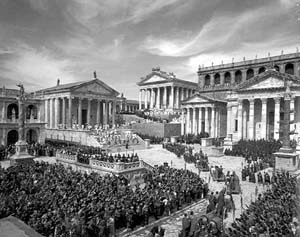 A China Central Television (CCTV) unit is developing an epic, fall-of-Rome-flavored documentary TV series around the theme of America in decline.

Unlike the crude state-sponsored videos that glorified the September 11 terrorist attacks as a humiliating strike against an arrogant superpower, the planned multipart production promises to be a slick dissection of American economic and military might.

Production notes for the CCTV series, which is tentatively scheduled to air in 2007, are said to provide a revealing glimpse of how certain government officials see the US--namely, as a dying hegemon. The Chinese view is that a number of factors, including "structural" economic problems and imperial overstretch, are combining to end US global supremacy.

In an effort to support and promote this point of view, the CCTV documentary plans to cover all the bases, to use an old American expression borrowed from baseball.

For example, the producers plan to devote at least one episode to the US immigration crisis and attempt to draw historical parallels between a commonly perceived cause of the fall of ancient Rome--unchecked immigration and invasions--and the flood of illegal immigrants pouring into the United States from Mexico and Latin America.

In an ironic twist, the segments on the US economy will supposedly highlight the gloom-and-doom opinions of some smart, successful citizens--fund managers, investment bankers, and analysts--who argue that the country has entered a long period of decline, an economic twilight of sorts, from which no escape is realistically possible. The talking heads of finance are expected to make the case for aggressively investing in emerging markets, especially the so-called BRIC countries (Brazil, Russia, India, China) that are destined to dominate the global economy by 2050, according to an increasingly fashionable Wall Street concept.

The CCTV documentary intends to contrast the US financial community's seemingly boundless enthusiasm for investing in China and other emerging markets with an apparently deepening disinterest in domestic investments (except for some stocks, prime property deals and a relative handful of healthcare and high-technology ventures).

The segments on US military power are likely to play up the hoary Mao-era "paper tiger" propaganda line, but with much more finesse than the above-mentioned anti-American videos. Highlighting mistakes made by the Pentagon in Afghanistan and Iraq, the production is expected to make the point that despite its awesome destructive power and global reach, the US military is increasingly overextended and incapable of swift, decisive action around the world. Besides, the documentary is expected to argue, the Iraq experience shows that the American people have lost their taste for foreign intervention and prolonged overseas conflict.

Translation: the US will be in no position to stop China if/when the time comes for it to invade and conquer Taiwan.

Posted by Confidential Reporter at 8:09 AM

Nice Blog and nice post. this is good information for in security industries. u can also make a post about H.264 DVR, 4 Channel DVR. Thanks