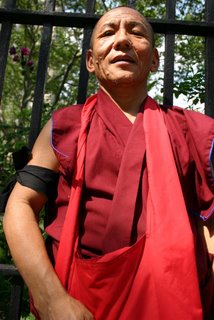 A black day for Tibet.

Chinese technology and imperialism were on full display Saturday, as Beijing inaugurated a rail link to the Tibetan capital Lhasa. The $4.2 billion "miracle railway" to the roof of the world fulfills a long-time goal of China's ruling Communist Party, which is showing increasing impatience with Tibet's restive native population and renewed determination to dilute the conquered country's culture by overwhelming it with Chinese migrants.

Many of whom, according to Communist Party planners, will travel by train.

The inaugural service from Beijing, which left in the evening amid much fanfare and publicity, is scheduled to arrive in Lhasa after a 48-hour, 4,000 kilometer journey reaching altitudes of 16,400 feet on the Tibetan plateau.

Tibetans in Dharamsala in India, where Tibet's universally admired spiritual leader, the Dalai Lama, presides over a government in exile, called Saturday a "black day" for Tibet and launched a website in protest.

China's army invaded and occupied the Himalayan nation in 1950 to impose Communist rule. Nine years later, the Dalai Lama fled to India after a failed uprising.

China claims the railway will boost Tibet's economy and reduce transport costs. In fact, Tibetans are rapidly becoming an underclass in their own country as a result of the government-sponsored Chinese influx and persecution of Tibetans. Since marching its troops into Tibet, Beijing has moved millions of Han Chinese into the country.

The new railroad is also a politically motivated environmental menace. Crossing permafrost and towering mountains, the train is certain to damage fragile, frozen highlands, according to environmental experts.

None of which seems to matter to China's president. Chinese state television showed Hu Jintao cutting a large red ribbon at the inaugural ceremony. In a speech to workers and others gathered at the station, he said that China is "ambitious, self-confident, and able to stand among the world's advanced nations."

He left out "peacefully rising."

Posted by Confidential Reporter at 9:02 PM