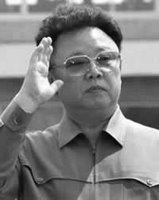 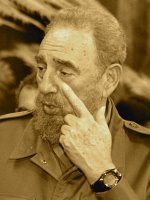 The North Korean leader is said to be obsessed with the episode, which, while bringing the United States and the Soviet Union close to nuclear war, was also responsible for assuring the survival of Moscow's Cuban Communist ally, Fidel Castro.

The crisis ended when the Soviet Union backed down and removed the missiles Moscow had secretly installed in Cuba to threaten the US. But, as we now know, the secret agreement between US President John Kennedy and Soviet Communist Party boss Nikita Khrushchev forbade any invasion of Cuba, not just by the US, but also by any other group or nation in the Western Hemisphere. And thousands of Soviet troops and KGB officers already in Cuba were allowed to remain on the island, bolstering an anti-American regime just 90 miles from Florida.

Shortly after the missiles were removed, the US, in accord with its covert deal with the Soviet Union, pulled American missiles out of Turkey. And US President Lyndon Johnson, following Kennedy's assassination, reaffirmed Washington's hands-off-Havana pledge.

The key lesson for Kim: missiles--and nukes--mean survival. Without weapons of mass destruction, Castro would have been long gone, another victim of US "imperialist aggression."

Which explains why the North Korean leader is also said to be obsessed with the Iraq war. As Kim supposedly sees it, Saddam Hussein would still be in power had he really had a nuclear arsenal to deter the US and Britain from attacking him.

Sources say Kim has spent hours screening news footage of the US invasion.

The criminally insane head of the Hermit Kingdom is also reported to have a somewhat nonconventional explanation for the longevity of his ally and protector, China. Kim watchers say Dear Leader credits the survival of China's ruling Communist Party with its development of nuclear weapons, including an arsenal of intercontinental ballistic missiles capable of striking cities throughout the US. When China went nuclear, Kim allegedly argues, the US came courting: Nixon visited Beijing, China was given Taiwan's seat in the United Nations, and the breakaway island was kicked out of the world body--after more than two decades of steadfast support by Washington.

Though it has not yet tested a nuclear weapon, North Korea is believed to have a small but growing arsenal of nuclear weapons, along with the missiles to rain atomic warheads down on South Korea and Japan. The secretive Stalinist state is also capable of hitting US military bases in Okinawa.

Posted by Confidential Reporter at 10:43 PM