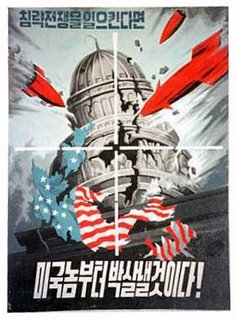 We suspected that there was more to the tests than met the eye. Unfortunately for the US and its allies, it seems that we were right; and, assuming he bothers to keep up with the news, Biden is probably already regretting his snappy, sound-bite response to North Korea's missile madness.

Disturbing details are seeping into the public domain. As reported by China Confidential and other outlets, and confirmed yesterday by the US State Department, a delegation of visiting Iranians observed the tests, which seem to have been conducted as part of a simulated response to a US air attack. The long-range Taepondong-2 missile that plunged intact into the Sea of Japan--after staying aloft for nearly two minutes and not 40 seconds as initially reported by the US--was meant to simulate a nuclear weapon strike on US allies--probably Japan--or assets. Two or three intermediate-range ballistic missiles were also fired, as China Confidential reported yesterday, in addition to three or four short-range missiles.

US, Japanese, and Israeli analysts believe the Iranian contingent--which traveled to North Korea via Beijing--included scientists, technicians, and 10 or more Iranian Revolutionary Guards officers, including members of the elite Partisans of the Mahdi group. Sources say the Iranians paid for the tests and were keen to observe the results as Tehran's strategic and tactical missile system was built by North Koreans, using Chinese designs. Iran's Islamist leadership is apparently convinced that the US intends to attack it--directly or through Israel.

Sources say the Iranians and their North Korean hosts were satisfied with the test results. Contrary to media reports, the exercise was successful.

Ironically, It was US Assistant of State Christopher Hill--a prominent dove on North Korea--who confirmed the Iranian presence at Pyongyang's test-firings. Appearing before the US Senate Foreign Relations Committee Hill underscored US concern about growing ties between China's vassal, nuclear-armed North Korea, and ally, nuclear-wannabe Iran.

Under questioning by Republican Senator George Allen of Virginia, Ambassador Hill said that Iranian representatives were on hand to witness North Korea's fireworks.

ALLEN: "Is it not true that there was at least one or more Iranian officials there to watch those missile launches?"

HILL: "Yes, that is our understanding."

When asked if the United States found the relationship between Pyongyang and Tehran worrisome, Hill said that was "absolutely correct."

Posted by Confidential Reporter at 1:06 PM