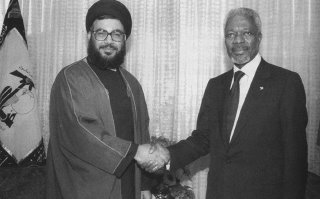 Regarding the war against Radical Islam and the Mideast peace deal, here's the view from Beijing:

In the United States, Secretary of State Condoleezza Rice has successfully sidelined Vice President Dick Cheney and defense secretary Donald Rumsfeld. US President George Bush has kept them around out of loyalty, but their power and influence has been dramatically diminished. Rice has her eyes on the Nobel Peace Price. China sees her as a closet foreign policy dove, in contrast with Cheney and Rumsfeld, and a potential friend who has more or less bought into Beijing's peacefully rising party line and the State Department's ridiculous "responsible stakeholder" concept. Our prediction: like former Secretary of State Henry Kissinger, she will work for the bipartisan China lobby after leaving State.

In Lebanon, Hezbollah is effectively running the show and about to take over the military, which is 70 percent Shiite. Nothing can stand in the way of Hezbollah's power grab and mainstreaming. The organization's sponsor and paymaster, Iran, has thus won its proxy war with Israel and the US, significantly strengthening Tehran's hand with respect to the nuclear impasse.

In Israel, the government of Prime Minister Ehud Olmert is on its last legs. His handling of the war was an utter disaster, debunking the myth of Israeli invincibility and damaging Israel's deterrent capabilities to a degree few would have thought possible prior to the war.

At the United Nations, Secretary General Kofi Annan has resurrected himself--at Israel's expense. Like Hezbollah, he showed that he can "stand up" to the US and Israel.

Welcome to the Chinese Century....

Posted by Confidential Reporter at 11:58 PM