Mideast Sees China as Counterweight to US Power 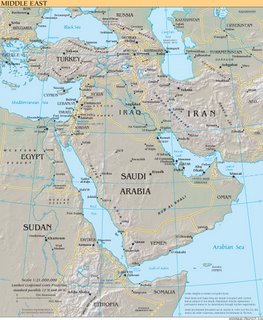 Regardless of exactly how the war in Lebanon ends for China's ally, Iran, and its terror proxy, Hezbollah, Beijing sees plenty of gains--and good times--ahead in the Middle East.

Communist Party propagandists and government think tank researchers contend China will increasingly be regarded as an alternative to the "hegemony" of the United States in the region. In other words, not only is energy-hungry China a potential economic partner for countries in the Middle East; it is also a potential political counterweight to US power and influence. The Chinese are signaling and suggesting to their Arab and Iranian friends that increased Chinese involvement in the Middle East means more freedom--from the US.

The ultimate objective of Chinese foreign policy is to replace the US as the global Hegemon. Edging the US out of the Middle East is a critically important strategic aim, which China's mercantilist "energy diplomacy" is designed to support. Seeking access to energy resources, Chinese state-run oil and gas behemoths are in a position to offer countries incentives no conventional company can ever match, including economic and military assistance, access to Chinese markets, and meaningful diplomatic backing, especially at the United Nations, where China enjoys veto power at the Security Council.

Power that Beijing is not afraid of using, to the delight of its anti-American allies and partners. In 2004, for example, China scored political and propaganda points with the hate-America crowd when it threatened to veto a US-sponsored resolution to impose sanctions on Sudan, where China has invested more than $8 billion.

More recently, China has said that it will block any UN resolution on nuclear wannabe Iran that includes threat of military force. Iran provides China with more than 10 percent of its energy needs; and China has invested a staggering $70 billion in Iran's oil and gas industry. (China went along with a toothless Security Council resolution condemning Beijing's nuclear-armed vassal, North Korea, for its provocative July 4 missile tests, after successfully cleansing the measure of language referring to use of force.)

All told, China, which is the world's second largest oil importer after the US, gets around 45 percent of its total oil imports from the Middle East. Over the next decade, that number could rise to 70 percent.

Saudi Arabia would like that. Around 17 percent of China's oil presently comes from Saudi Arabia. The Saudis are eager to sell more oil and gas to China--as a way of reducing Riyadh's dependence on the US. Chinese President Hu Jintao recently visited Saudi Arabia, following his visit to the US and meetings with President George Bush. Energy deals were the main topic of discussion in Saudi Arabia.

Posted by Confidential Reporter at 2:48 PM