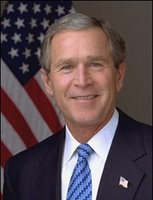 President Bush's push for punitive measures against North Korea will not deter the rogue regime from adding to its nuclear arsenal.

So say experts who expect Pyongyang to escalate the current crisis in response to US calls for United Nations sanctions and an embargo, which the rogue regime would regard as an act of war.

Specifically, North Korea is likely to detonate another nuclear device and test-fire more missiles to ratchet up tensions. The secretive Stalinist state is also likely to continue threatening nuclear attacks against the US while hinting at possible chemical and biological attacks.

Meanwhile, former President Jimmy Carter is promoting the notion that the regime of Dear Leader Kim Jong-il is divided between hardline and moderate elements.

Which is utter nonsense.
Posted by Confidential Reporter at 8:29 PM