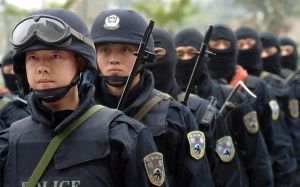 China's official Xinhua news agency today quoted a senior government official as saying the number of protests and riots by discontented Chinese citizens dropped by more than 20 percent in the first nine months of 2006.

Liu Jinguo, who is vice minister of the Ministry of Public Security, reportedly told a police meeting on Monday that Chinese police dealt with 17,900 "mass incidents" from January to September this year- a 22.1 percent reduction in the number of protests, riots, mass petitions and other "mass incidents" in the corresponding months of last year.

China's leaders are in the middle of a carrots-and-sticks social stability campaign in the context of trying to create a more peaceful, "socialist countryside." The carrots: raising the welfare and incomes of China's poor farmers and migrant workers. The sticks: cracking down--hard--on dissidents and disgruntled peasants.

Liu said China is sending more policemen to its rural regions and has built more than 30,000 police stations in the restive areas, which he described as "overall stable."

Urbanization is accelerating throughout China, with half the 1.3 billion Chinese--a tenth of the world's population-- expected to live in cities by 2010.
Posted by Confidential Reporter at 6:30 AM