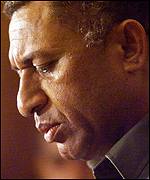 Fiji's military commander, Frank Bainimarama, sees himself as the protector of multiculturalism in the Pacific island nation. He asserts that the deposed government of Prime Minister Laisenia Qarase was discriminating against the ethnic Indian minority, which makes up about 40 percent of the population.

"We consider that Fiji has reached a crossroads and that the government and all those empowered to make decisions in our constitutional democracy are unable to make decisions to save our people from destruction," Bainimarama said Tuesday.

The ethnic Indian minority, known as Indo-Fijians, are descendants of sugar cane cutters brought in by the British in the 19th century. Perhaps 90 percent of the community supports Bainimarama.

The army chief has been in dispute with Qarase for months over his plans to grant amnesty to those behind a nationalist uprising of six years ago. Bainimarama believes the earlier coup plotters were treated far too leniently.

British Commonwealth Secretary-General Don McKinnon told reporters Tuesday that Fiji will probably be suspended from the organization of former British colonies in response to the coup. Britain's Foreign Office issued a statement calling the coup a setback to democracy in the Pacific nation and announced an immediate suspension of bilateral military assistance to Fiji. The Foreign Office said further measures are being discussed with Britain's EU partners.

Australian Foreign Minister Alexander Downer had said earlier that Canberra would impose a similar sanction on Fiji if the coup went ahead.

Australian Prime Minister John Howard criticized the coup, but turned down a request from ousted Prime Minister Laisenia Qarase for Australian troops to intervene. Howard said he does not think it is in Australia's interest to become involved.
Posted by Confidential Reporter at 1:33 PM