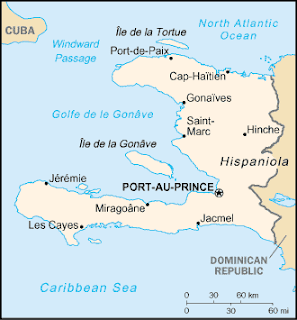 More proof that the Monroe Doctrine is dead.

Agents of state-owned Chinese companies are circling large land tracts in Haiti, the poorest nation in the Western Hemisphere. The Chinese want to use the land to grow jatropha, a hardy, drought-resistant, perennial plant that produces excellent feedstock oil for biodiesel fuel processing.

A natural barrier against erosion and desertification, jatropha is native to the Caribbean; plantations are already operating in the Dominican Republic, which shares the island of Hispaniola with Haiti.

The crop has the potential of breaking the cycle of poverty in Haiti forever, while helping to reduce greenhouse gas emissions. A hectare of jatropha yields 1,892 liters of fuel--more than four times as much as soybean. Not surprisingly, jatropha has been hailed as a miracle plant capable of transforming the developing world.

All of which is truly impressive and inspiring. But the Chinese agenda includes more than environmentally friendly, socially sustainable biofuels. Beijing announced today that it will send the fifth group of riot police, totaling 125 members, to Haiti next month for an eight-month peace-keeping mission. They will bring the total number of riot police officers sent by China to Haiti since October 2004 to more than 1,000.

China's peace-keeping role gives the country a military toehold in Haiti, which, combined with increased Chinese investment on the island, increases Beijing's political leverage over the Haitian government. China's primary objective is to persuade Haiti to end formal diplomatic relations with Taiwan. Haiti is one of only 25 remaining nations that still recognize the self-ruled island that China regards as a renegade province. Half the Taiwan relations bloc is in the Latin American Caribbean region, in America's backyard.

Secondly, China wants access to raw materials--that is, whatever Haiti and other Caribbean nations might have to offer, as Beijing pursues a policy of securing preferential access to the raw materials of Latin American nations, including anti-American Venezuela, a key Chinese ally. China is about to replace, or, at least, rival the United States as the South American nation's number one oil customer; and Chinese investment in Venezuelan production and refining is increasing.

In the context of this mercantilist-style energy diplomacy, China will cooperate with Venezuela's encroachment effforts. The Castro-loving crackpot of Caracas--Venezuelan President Hugo Chavez--has set his sights on meddling and making trouble for the US throughout the region. Corrupt, seemingly hopeless Haiti is an easy target. Venezuela and China think Haiti has hit rock bottom and is ready for rebuilding--in accord with their interests.

China also wants to increase its ownership of shipping and port facilities in the region, as part of a policy of establishing strategic presence at so-called choke points around the world, including the Panama Canal and the Bahamas. The canal is effectively controlled by Hong Kong stock exchange listed Hutchinson Whampoa, a company controlled by Li Ka Shing, a tycoon with strong ties to China's Communist Party rulers.
Posted by Confidential Reporter at 3:37 PM