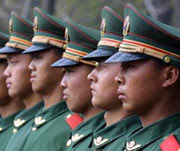 Why does a giant, rapidly developing nation with no real enemies and plenty of problems to solve need to spend about $100 billion a year on defense? Why does a peacefully rising power need to be able to project its power--militarily--around the world?

The answer to the above questions is that a peacefully rising country that is threatened by no nation on earth need not spend lavishly on defense if it is truly committed to a peaceful rise.

Which apparently is not the case with ascending China. The country's huge and opaque military buildup--including its steadily expanding arsenal of rockets aimed at Taiwan, stunning Space-war program, and troubling plans for a blue water navy--can only be logically explained as follows:

(1) China intends to attack Taiwan and seeks sufficient military power to deter the United States from even thinking about intervening in the coming conflict. The US is committed by law (Taiwan Relations Act) to help Taiwan to defend itself; but there is no clear-cut obligation to shed blood on behalf of the breakaway, democratic island that Beijing regards as a renegade province.

(2) China intends to bully and intimidate other countries, including nations far from its shores, into doing its bidding. The underlying strategy--in keeping with a set of principles attributed to the legendary Sun-Tzu--is to win wars without fighting them. In his sixth century BC treatise, The Art of War, Sun-Tzu says: "Subjugating the enemy's army without fighting is the true pinnacle of excellence."

(3) The Chinese military, not the Communist Party, really runs China. Civilian control over the People's Liberation Army is a useful myth.

We're confident about #1 and #2, uncertain about the PLA's suspected control of the Party. For all the dramatic changes that have taken place in China, relations among the powers that be constitute an impenetrable mystery.

Meanwhile, the defense spending numbers are telling; the lack of transparency, worrisome. China's military budget will grow by 17.8 percent to nearly $45 billion this year. That's the official figure; the actual projected amount is widely assumed to be north of $100 billion.

Jiang said: "China's national defense is aimed at protecting national security and unification and to ensure the country makes steady progress toward building a moderately prosperous society. China has neither the wherewithal nor the intention to enter into an arms race with any country and China does not and will not pose a threat to any country."

Although China has not fought a military conflict since the 1980s, it has increased defense spending by more than 10 percent annually in recent years.
Posted by Confidential Reporter at 8:34 AM