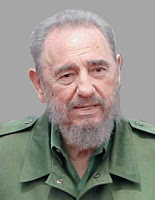 Contrary to American media and intelligence reports, Communist Cuba denies that its iconic leader, Fidel Castro has cancer. But China has a different view. Middle Kingdom medical experts believe the Cuban despot had cancer, but was cured by shark cartilage treatments.

The 80-year-old Castro is said to have been given massive shark cartilage enemas. Shark cartilage is believed to contain a protein that inhibits angiogenesis (rapid blood vessel development), which is associated with malignant tumor growth as well as with normal development and wound healing. Without angiogenesis, cancerous tumors shrink and die.

The cartilage under a shark's dorsal fin and near its tail is supposedly most potent. Chinese folk medicine has long prized the fin, crediting it with almost magical properties.

In the United States, the popular, network television, magazine-style news program, "60 Minutes," reported on Cuba's shark cartilage cancer research and therapy back in the 1990s. Veteran correspondent Mike Wallace narrated the segment, which launched a mini-shark cartilage food supplement industry--and boosted the credibility of natural medicine, generally. Most of the Cuban patients, who were near death when their rectal shark cartilage treatments began, recovered--a dramatic development in the world of cancer therapy.

Most Cancer specialists doubt that natural shark cartilage, administered rectally or orally, can be an effective angiogenesis blocker. Natural therapies are almost always ridiculed by the pharmaceutical industry; any treatment that can't be injected (or synthesized and patented) is considered bogus.

Castro underwent surgery for an unspecified illness in July. At the time of the operation, he handed power to his brother, Raul.
Posted by Confidential Reporter at 8:15 PM