Japanese Investors Drawn to US Biofuels 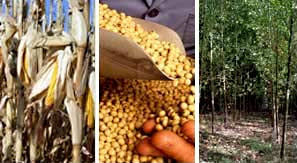 Japanese companies and institutional investors are actively searching for opportunities to profit from the biofuels boom in the United States, sensing a historic shift in US energy use, environmental awareness, and agricultural resource deployment. The Japanese investors are said to be proceeding cautiously and choosing carefully, purchasing minority positions in promising projects.

What's driving their interest? In addition to forecasting escalating energy costs, Japanese energy experts expect that the US will soon adopt a national climate policy--meaning mandatory reductions in carbon dioxide and other greenhouse gases through a carbon tax or so-called cap-and-trade programs that create financial incentives for cutting emissions by assigning costs to polluting. The US Congress is considering various cap-and-trade legislative proposals; one way or another, the Japanese reason, Americans will be forced to pay to pollute. The new rules, combined with federal and state government subsidies and incentives for biofuels production and technology development, are certain to spur the emerging energy industry.

In contrast with Chinese companies seeking to lock in preferential access to biofuels in Latin America and Africa (scroll and search this blog for the relevant stories), the Japanese investors drawn to the US market are playing a passive role, trusting US partners and managers to both develop and operate the alternative energy ventures. Some Japanese investors are believed to have obtained commercialization rights to proprietary technolgies that were developed at leading Japanese research centers. At least one US merchant bank with a blue-chip base of Japanese investors is known to have funded a patent-pending, US biodiesel processing system.

Biodiesel is a prime focus, say sources close to some of the Japanese investment groups. For example, China Confidential has learned that a subsidiary of an Osaka-listed construction and real estate development firm, Sennennemori, has recently invested in development of a state-of-the-art biodiesel project in New York State. The planned plant, which will have a production capacity of 50 million gallons a year of biodeisel, is located in rural Washington County, more than 200 miles north of New York City.

The Manhattan-based company that is developing the project, Hampton Biofuels, intends to use a modular, multi-feedstock technology that can produce biodiesel fuel from either natural or waste vegetable oils. The plant will be one of the largest of its kind in the US, strategically situated to supply the Northeast markets of Upstate NY and New England, in close proximity to the Hudson River port of Albany, which is the state capital.

Biodiesel is a clean burning alternative fuel that can be produced from domestic resources, reducing dependence on foreign oil. Biodiesel contains no petroleum, but can be blended at any level with petroleum diesel to create blends for use in diesel engines with little of no modifications. Biodiesel can also be blended with petroleum diesel to produce an alternative home heating oil, known as bioheat, and for burning in power plants to generate electricity. A power and light company in Massena, NY, on the St. Lawrence River separating the US and Canada, is completing construction of a 60 million gallon-a-year biodiesel plant (using a technology provided by leading-edge Greenline Industries). The utility reportedly plans to consume all its biodiesel output.

In terms of the plant planned for New York's Washington County, there is an interesting historical angle: the first US Consul General to Japan, Townsend Harris (1804–1878) was born and reared in the county, in what is now the village of Hudson Falls. He moved to Manhattan as a young man, where he became a successful merchant and importer from China, and founded The City College of New York, the first free public school of higher education in the US.

As a diplomat, he negotiated the "Harris Treaty" between the US and Japan and is credited for opening the Japanese Empire to foreign trade and culture. He was a respected and admired figure in Japan, and is honored there to this day.

Post Script: Notwithstanding the above, by no means is Japan neglecting South America. Like the Bush administration, Tokyo is keen on cooperation with Brazil, the world's largest producer of ethanol and sugar cane, the most economical and efficient ethanol feedstock. Brazil's state-controlled oil company, Petrobras, and the Japan Bank for International Cooperation signed a memorandum of understanding on March 5 in Rio de Janeiro. The two entities plan to evaluate financing possibilities for biofuel projects to be developed jointly by Petrobras and Japanese companies, both inside and outside Brazil. Projects include the production and sale of ethanol and biodiesel, and electric power plants using sugar cane bagasse (the woody material left after squeezing all the sugar out of the cane).
Posted by Confidential Reporter at 8:25 PM