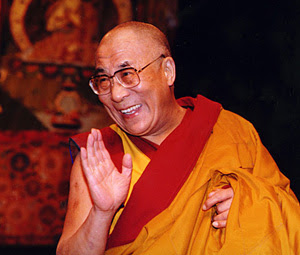 VOA reports that a US official says international talks in Germany on the Iranian nuclear crisis have been postponed after China canceled in protest....

The unidentified official told reporters Monday that the move seems to reflect China's displeasure over a visit by the Dalai Lama to the United States.

The US Congress will award the exiled Tibetan leader its highest honor in a ceremony Wednesday--the same day the Berlin talks were scheduled.

The unnamed official said China's cancelation will probably push the talks off until next week.

The meeting between the five permanent members of the UN Security Council, Britain, China, France, Russia and the United States and Germany is supposed to discuss whether to impose new sanctions on Iran.

China also canceled this year's annual human rights talks with Germany that were to be held in December.

After German Chancellor Angela Merkel signaled she would meet the Dalai Lama last month over China's protests, Beijing called off talks with German officials scheduled for the same day.

President Bush is expected to attend Wednesday's award ceremony and meet with the Dalai Lama at the White House. China has objected to the Dalai Lama's visit, which it says interferes in its internal affairs.

On Friday, China accused the Dalai Lama of instigating protests by Tibetan exiles that damaged its embassy in New Delhi last week.

China challenges attempts by the Dalai Lama to meet with world leaders, accusing him of secretly promoting separatism.

The Dalai Lama denies the charge. Since the late 1980s, he has been calling on Beijing to hold talks to negotiate an autonomous status for Tibet.
Posted by Confidential Reporter at 12:29 AM