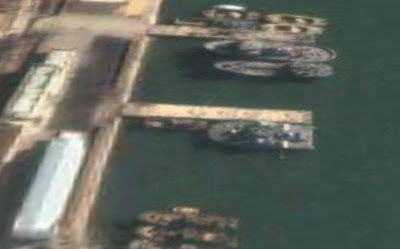 Google Earth is making waves with an image of a warship anchoring, its weapons removed, in Nampo port, near the Taedong River in North Korea.

North Korea was known to have only three warships with a displacement of more than 1,000 tons--two 1,500-ton Najin-class frigates manufactured in the 1970s and one 1,600-ton Soho-class frigate in the 1980s.

South Korean and US intelligence authorities assume that the warship was imported as scrap metal given that it has no guns and radar. But it is possible that the North will install weapons in the vessel to use it as a warship. Pyongyang has long tried to import large warships from China and Russia in response to South Korea’s construction of warships with a displacement of more than 3,000 tons, including a 7,000-ton Aegis vessel.

Experts say that the warship is likely to be the latest Krivak III model. A fully functional Krivak III is 123.5 m long and 14.2 m wide and equipped with SA-N-4 ship-to-air missiles and KA-27 helicopters. Built in the mid 1980s, it is still used by the Russian Navy.
Posted by Confidential Reporter at 9:11 PM