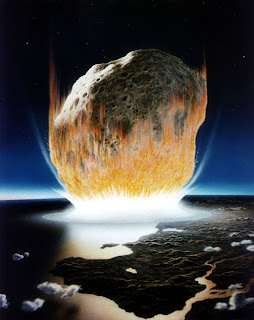 While narrow-minded nationalists and religious fanatics promote violence, hatred, and extremism in an effort to divide humanity, a few global visionaries are raising awareness of a real threat--possible planetary collision with an asteroid--which should unite all nations on Earth. Danica Kirka reports from Vienna, Austria:

It is disaster planning on a galactic scale: Space experts want to come up with a contingency plan on what to do in case a killer asteroid collides with Earth.

The experts, including former American astronaut Rusty Schweickart, told U.N. officials Tuesday that the international community needs a plan to counter so-called Near Earth Objects in advance of the potential catastrophe. Deflecting asteroids — or at least evacuating people in areas where they might strike — could save millions of lives.

"This is a natural disaster, which is larger, potentially, than any other natural disaster we know of," Schweickart said. "However, it is preventable ... that's a very important thing to keep in mind. But it is our responsibility to take action to do that."

Asteroids are small planetary bodies that revolve around the sun, according to the NASA Web site, which states that many scientists believe an asteroid collided with Earth about 65 million years ago, helping cause environmental changes that led to the extinction of the dinosaurs.

Schweickart, a former Apollo 9 crew member, spoke at a news conference after briefing U.N. officials on a recent report called "Asteroid Threats: A Call for Global Response." The report was compiled by the International Panel on Asteroid Threat Mitigation that is made up of members of the Association of Space Explorers, among others.

The report, among other things, calls for an international decision-making program within the framework of the United Nations to decide on actions to counter asteroids. It also urges the creation of an information, analysis and warning system that would operate telescopes worldwide to detect and track possibly harmful objects.

Schweickart acknowledged that devastating collisions happen "very infrequently" but warned the risk could not be ignored. Next year alone, six asteroids have a "very small" probability of hitting the Earth, he said.

Click here to read the whole article and here to read a 1989 report about a close call (in cosmic terms) with an asteroid that is expected to return.

In 2004, astronomers discovered the killer asteroid Apophis--the Destroyer--named for an ancient Egyptian mythological serpent that dwells in the eternal darkness of the underworld and tries to swallow Ra during his nightly passage. NASA estimated that an impact from Apophis would release more than 100,000 times the energy released in the nuclear blast over Hiroshima. Thousands of square kilometres would be directly affected by the blast but the whole of the Earth would see the effects of the dust released into the atmosphere.

Last April, a German schoolboy, Nico Marquardt, revised NASA's figures for the chances that Apophis will hit earth. If the asteroid hits a satellite in 2029, its path could be diverted enough to cause it to collide with Earth on the next orbit, in 2036. NASA had calculated the chances as 1 in 45,000 but the 13-year-old, in his science project, made it 1 in 450.

Posted by Confidential Reporter at 4:59 PM