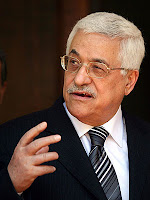 Mahmoud Abbas said he will not recognize Israel as a Jewish state.

"A Jewish state, what is that supposed to mean?" the Palestinian Authority president asked in a speech Monday in Ramallah. "You can call yourselves as you like, but I don't accept it and I say so publicly."

Israeli Prime Minister Benjamin Netanyahu has said it will be impossible for the two sides to arrive at a peace agreement if the Palestinians do not recognize Israel as a Jewish state, though he has not made it a precondition to restarting talks.

Abbas also said that he will not resume peace talks until Israel enforces a complete settlement freeze and that Netanyahu must commit to the notion of a Palestinian state, not the "economic peace" the Israeli leader has been promoting.

"If you do not want the two-state solution, then what do you accept?" Abbas said.

Abbas also drew his red line on the final borders of the two states.

Tibi said "recognition between states does not include recognizing the essence of the state but rather their right to exist, their independence and their borders."
Posted by Confidential Reporter at 12:24 PM