US Weighing Punishing Israel if it Attacks Iran

Having taken military action against Iran off the table, the Obama administration is considering ways of punishing Israel if it attacks Iran to end its nuclear arms program (and prevent a second Holocaust).

In other words, having failed to contain Iran, the United States is concentrating on restraining Israel.

Administration contingency plans include condemnation of Israel, support for a United Nations Security Council resolution that could include sanctions on Israel, and suspending or seriously cutting military aid to the Jewish State.

One of President Obama's closest foreign policy advisers, National Security Council member Samantha Power, is a proponent of ending military aid to Israel in order to force it to negotiate with Iran's Palestinian Islamist proxy, Hamas, and withdraw from all lands taken during the Six-Day War of June 1967. Power also advocates shifting aid to a Palestinian state. Overall, she views Israel as a liability and a historic mistake, in line with the European left position (and that of old-line, right-of-center, American isolationists and anti-Semites). Her antidemocratic admirers in the Democratic Party's (Hillary-hating) left wing agree and are eager for an opportunity to paint Israel as a Jewish North Korea (although they actually have more sympathy for North Korea than for Israel). 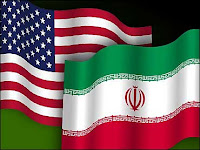 The big question is how the Obama administration would react if Iran retaliated against Israel indirectly as well as directly--by making good on its repeated threats to attack U.S. forces in the Middle East and shut down the strategic, 29 mile-wide Strait of Hormuz, through which an estimated 20% of the world's crude oil is transported by tanker ships. Would the U.S. fight back with real ferocity or respond in a limited way while blaming Israel for preemptively attacking Iran and appealing to "the Muslim world" for "understanding?"

One wonders how the Apologizer-in-Chief would react.

Holocaust-denying Iran and its Lebanese Islamist Shiite proxy, the Hitlerian Hezbollah, have also vowed to "burn Tel Aviv" if attacked by either Israel or the U.S. Jerusalem's clerical fascist foes have amassed arsenals of ballistic missiles and rockets to bombard Tel Aviv and Haifa. Israel's political-military leadership must be taking this into consideration; a "six-hour war," designed to eliminate Iranian missile installations and nuclear sites could be the result.

Three decades of attempts to appease and accommodate Islamist Iran have led to the present countdown to conflict. Obama's so-called diplomatic surge--which transcends appeasement in downgrading and ultimately abandoning Israel in order to try to strike a "grand bargain" with Iran for pacification of the Middle East--has put Jerusalem on a political collision course with Washington.

Israelis are understandably stunned by the developments. Prime Minister Netanyahu's late, great mentor, Menahem Begin, would not recognize today's political landscape; his late, Labor Party rivals--Golda Meir comes to mind--would also be shocked by the situation. Time was, no Israeli expected Iran--a predominantly Muslim, non-Arab ally of the U.S. and tacit ally of Israel--to emerge as the number-one existential threat to the Jewish State.

But that was before the catastrophic Carter administration betrayed Iran's modernizing monarch, Shah Mohammed Reza Pahlavi, in a craven, failed attempt to hop aboard the Islamist bandwagon.

EDITOR'S NOTE: About Obama's apologizing to the world and bowing to the Saudi King--the left loves it. The more the President apologizes for alleged American arrogance and other supposed sins, the more popular he is with the Democratic Party's left wing. The deeper he bows, the more they appreciate him. The left believes it is high time that America was brought to its knees, forced to submit to the Third World. Like the radical right, the left makes common cause with Islamism in order to cut America down to size and set Israel up for a final solution. Israel is especially despised for its success and power; its defeat is seen as paving the way for the disappearance of the Jews as a people. Like the failed Russian revolutionaries of the late 1800s, the pro-pogrom Norodniki, who sought to ally with Russia's notoriously anti-Semitic peasants, today's left believes that "Jewish blood will oil the wheels of revolution."

Most Jewish Norodniki left the movement because of its anti-Semitism. Will American Jews leave the Democratic Party when the Obama administration's betrayal of Israel becomes too obvious to ignore?
Posted by Confidential Reporter at 1:26 PM