India and Israel Planning for the Worst 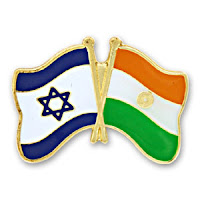 India is contingency-planning its own answer to a Taliban/Al Qaeda takeover of neighboring, nuclear-armed Pakistan--possible preemptive military action to prevent the country's nuclear warheads and missiles from falling into Islamist hands.

Among other moves, India is cooperating closely with Israel. Both countries are existentially threatened by Islamist atomic arms. israel could covertly assist a preemptive Indian invasion of Pakistan, which was part of India until 1947, when it gained independence from British rule and Muslim-majority areas were partitioned to form a separate state of Pakistan.

In recent years, Israel has provided India with military technology and counter-terrorism training assistance; and India has supplied Israel with useful intelligence on Al Qaeda and Iran, with which India has diplomatic relations and strong trade ties.

The United States is opposed to Indian-Israeli military cooperation. In sharp contrast with previous U.S. administrations, the Obama administration does not see Israel as a strategic ally; increasingly, in fact, the Jewish State is ignored, its advice and intelligence disregarded.

All of which is incredibly ironic, given many American Jews' slavish devotion to the Democratic Party, an affiliation bordering on religious zeal in the case of dyed-in-the-wool, Jewish liberals and leftists (such as Obama Senior Adviser David Axelrod). But that's another story.
Posted by Confidential Reporter at 11:37 AM