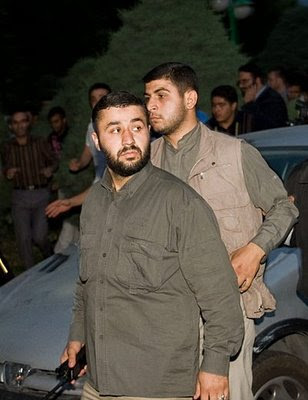 Iranian exile sources say the regime has imported some 15,000 mercenaries to lethally suppress pro-opposition protesters, senior clerics, democracy-seekers, and other dissidents. Iran's Lebanese Islamist proxy, Hezbollah, has supplied most of the mercenaries; but Hamas and Venezuela have also provided units.

Aircraft carrying the mercenaries have been seen landing at the Southern port of Mahshahr.

The bearded man pictured above in a green shirt, holding a walkie-talkie while patrolling the streets of Tehran, is Hussein Monif Ashmar, a leading Hezbollah operative, whose responsibilities allegedly include organizing suicide attacks. His photograph was identified by a now exiled former member of Quds (islamic iran's Special Forces), Amir Farshad Ebrahimi.

And China Confidential has learned that Venezuelan security experts have been assigned to provide personal protection services to the Supreme Leader and maniac-in-chief Mahmoud Ahmadinejad.

Ahmadinejad recently spent over $1 million on two, specially trained, Venezuelan bomb-sniffing dogs to guard his office--to the horror of visitors. Believers in barbaric Islam (which U.S. President Barack Obama urges Americans to "respect") regard dogs as utterly unclean. Hence, the Muslim world's well known cruelty toward dogs--wonderfully noble, intelligent, and loyal animals, with which human beings have developed a unique and inspiring bond dating to prehistoric times. [EDITOR'S NOTE: Clearly, the life of any normal dog is far more precious and worthy of respect than the life of any Islamist.]

Islamist Iran has a long history of using Palestinian thugs and killers. PLO chief Yasser Arafat had militias flown in to help in the street killings of the Islamic revolution and to carry out executions in the prisons.