Hitler's 'Number One Anti-Semite' Converted to Islam, Worked for Nasser and Nazi Underground 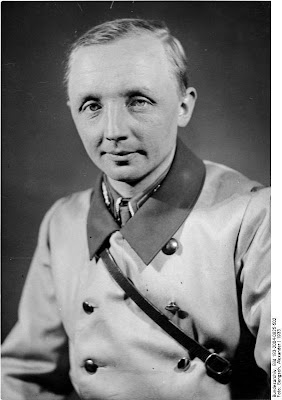 Joel Fishman's brilliant 2007 essay on the media war against Israel is must reading. The excerpt below deals with "Hitler's Number One Anti-Semite," Johann von Leers, alias Omar Amin.

Because issues of historical continuity and particularly the transfer of ideas and are a matter of importance, special mention should be made of Prof. Dr. Johann von Leers (1902- 1965). He was one of the most important ideologues of the Third Reich and later served in the Egyptian Information Department.

In April 1938 von Leers was named professor at the Friedrich-Schiller University in Jena, and his area of expertise was "Legal, Economic, and Political History on a Racial Basis" (Rechts-, Wirtschafts- und politische Geschichte auf rassischer Grundlage). He mastered five languages: English, French, Spanish, Dutch, and Japanese.[38] As a young man he participated in the nationalistic youth movement Adler u. Falken (Eagles and Hawks), where he formed a lifelong association with Heinrich Himmler. He was one of the early members of the Nazi Party, and in 1929 Goebbels made him his protégé. [39]

Von Leers had been a committed member of the German Movement of Faith, a project under Himmler's patronage whose purpose was to "free Germany from the imperialism of Jewish-Christianity" by creating a new pagan religion to take its place.[40] An Israeli researcher found indications that, in cooperation with a certain Friedrich Lamberty-Muck[41] who advocated polygamy, von Leers became one of the initiators of a plan to increase the Aryan race through breeding, an initiative which Himmler enthusiastically adopted and subsequently resulted in the Lebensborn project.

Von Leers was the expert in Jewish affairs. An open advocate of genocide, he was one of the most radical anti-Semitic publicists of the Third Reich. The Jewish philosopher Emil Fackenheim explained that von Leers took the position that "states harboring Jews were harboring the plague, and that the Reich had the moral duty and by the principle of hot pursuit, the legal right to conquer such countries, if only to wipe the plague out." [42]

In a personal communication to Fackenheim, historian Erich Goldhagen explained "that whereas of course the bacilli idea was common among Nazis, von Leers had the unusual distinction of not bothering to veil his call for mass murder in euphemistic language." After his death, "his widow [Gesina Fischer née Schmaltz], who shared his views, returned to Germany, where she embarrassed Neo-Nazis by defending Hitler's ‘extermination' of the Jews openly, instead of classifying it among his ‘mistakes.'"[43]

Von Leers possessed undeniable talent and applied it to construct an ideological foundation for National Socialism and Islam based on their shared hatred of the Jews. [44] He continued this endeavor in Egypt after the war, and his efforts were welcomed and reciprocated.

Herf reports that in December 1942, von Leers published an article in Die Judenfrage, a journal which belonged to the anti-Semitic intellectual world, entitled "Judaism and Islam as Opposites." As the title indicates, the author's perspective is Hegelian, presenting Judaism and Islam in terms of thesis and antithesis. This essay also reveals the ingratiating National Socialist perspective which von Leers projected on the Islamic past as well as the intensity of his hatred for Judaism and Jewry. The following passage is part of the original text. The author thanks Prof. Herf for sharing this remarkable document, parts of which he first published in paraphrase with direct citations:

Mohammed's hostility to the Jews had one result: Oriental Jewry was completely paralyzed. Its backbone was broken. Oriental Jewry effectively did not participate in [European] Jewry's tremendous rise to power in the last two centuries. Despised in the filthy lanes of the mellah [the walled Jewish quarter of a Moroccan city, analogous to the European ghetto],[45] the Jews vegetated there. They lived under a special law [that of a protected minority], which in contrast to Europe did not permit usury or even traffic in stolen goods, but kept them in a state of oppression and anxiety. If the rest of the world had adopted a similar policy, we would not have a Jewish Question [Judenfrage].... As a religion, Islam indeed performed an eternal service [to the world]: it prevented the threatened conquest of Arabia by the Jews and vanquished the horrible teaching of Jehovah by a pure religion, which at that time opened the way to a higher culture for numerous peoples ....[46] 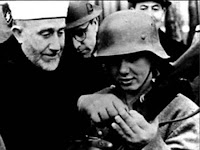 For his part, the ex-Mufti of Jerusalem, Haj Amin al-Husseini in his conversation with Hitler of 21 November 1941 and his radio broadcasts contended that Jews were the common enemy of Islam and Nazi Germany.[47] The ex-Mufti frequently went on tour to encourage the Balkan SS Muslim units, and the Axis radio stations faithfully covered these visits. During his broadcast of 21 January 1944, he proclaimed:

The Reich is fighting against the same enemies who robbed the Moslems of their countries and suppressed their faith in Asia, Africa and Europe.... National Socialist Germany is fighting against world Jewry. The Koran says, "You will find that the Jews are the worst enemies of the Moslems." There are considerable similarities between Islamic principles and those of National Socialism, namely in the affirmation of struggle and fellowship, in the stress of the leadership idea, in the ideal of order. All this brings our ideologies close together and facilitates cooperation. I am happy to see in this division a visible and practical expression of both ideologies.[48]

After the war, von Leers lived incognito in Italy until 1950 when he fled to Argentina, where he served as editor of the Nazi monthly Der Weg and entered into close contact with Adolf Eichmann. After the fall of Peron in 1955, he moved to Cairo where he served in the Egyptian Information Department. Encouraged by the ex-Mufti who was also living in Egypt, he converted to Islam and assumed the names Mustafa Ben Ali and Omer Amin Johann von Leers.[49]

Von Leers sponsored the publication of an Arabic edition of The Protocols of the Elders of Zion, revived the blood libel, organized anti-Semitic broadcasts in numerous languages, cultivated neo-Nazis throughout the world, and maintained a warm correspondence encouraging the first generation of Holocaust deniers, one of whom was Paul Rassinier.[50] One source reported that von Leers was the first to launch the idea of a separate Palestinian nationality as part of the wider war against Israel.[51]

In addition to the professional obligations of his day job, Johann von Leers was "active as the contact man for the organization of former members of the SS (ODESSA) in Arab territory."[52] It is reported that his old friend, Haj Amin al-Husseini, secured his post as political adviser in the Egyptian Information Department, but another source suggests that a political officer at the Egyptian embassy in Buenos Aires recruited him.[53] When von Leers arrived in Cairo, the ex-Mufti, Haj Amin, publicly welcomed him: "We thank you for venturing to take up the battle with the powers of darkness that have become incarnate in world Jewry."[54]

If today's Arab anti-Israeli and anti-Jewish propaganda strongly resembles that of the Third Reich, there is a good reason.

Click below for archived video of Hitler's meeting with the Grand Mufti.

Posted by Confidential Reporter at 1:03 PM