The Conspiracy to Use NATO Against Israel 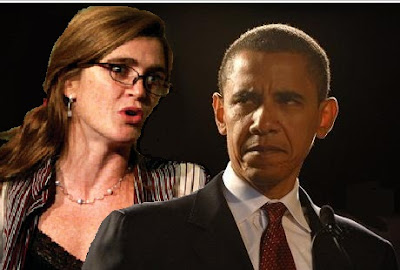 Kosovo ... Libya ... Palestine?
Tripoli Today, Tel Aviv Tomorrow?
A chilling, admittedly rushed early warning from Foreign Confidential™ analysts ... upon information and belief, as lawyers like to say.
A once unthinkable conspiracy is afoot--to deploy NATO forces against a strategic U.S. ally that is also the only democracy in the Middle East.
The country is Israel, of course, the tiny Jewish State that has never known a day of peace since its miraculous rebirth in its ancient homeland.
Barack Obama's reelection is central to the perfidious plot. Obama is the only U.S. Presidential candidate who is sufficiently hostile to Israel to go along with the conspiracy, as the potential usefulness of the only anti-Israel GOP hopeful, Ron Paul, is neutralized by his marginal appeal and old-line isolationism (recalling the likes of aviator Charles Lindbergh and other Nazi supporters and sympathizers in the years leading up to the Second World War).
The Conspirators
The three (European-born) authors of the anti-Israel conspiracy are Jimmy Carter's former National Security Advisor, Zbigniew Brzezinski, Obama foreign policy advisor Samantha Power, and her patron, George Soros, the anti-Zionist, leftwing billionaire. Brzezinski, who was the architect of the Carter administration's intervention in Afghanistan on the side of Islamist warlords--before and in order to bring about the Soviet invasion of that country--and the brain behind the administration's catastrophic complicity in the Islamist overthrow of Iran's pro-American, modernizing monarch, Shah Mohammed Reza Pahlavi, has advocated U.S. downing of Israeli warplanes if Israel attacks Iran's nuclear installations without Washington's approval. Power has proposed using U.S. and United Nations troops to impose a "Responsibility to Protect" (Palestinians) solution on Israel.
The Longterm Objective
The conspiracy's longterm objective is to use the R2P doctrine and the Kosovo-inspired intervention in Libya's civil war--on the side of Al Qaeda-connected Islamists--as a precedent for forcing Israel to withdraw to indefensible borders in order to create a "contiguous Palestinian state," as Obama put it in a recent speech, consisting of the Hamas-ruled Gaza Strip, which is already a de-facto independent, Islamist state; the disputed "West Bank" territories of Judea and Samaria, and East Jerusalem, which Israel liberated from Jordan in the Six-Day War of June 1967; and a land corridor connecting Gaza with the aforementioned inland areas west of the Jordan river. It is further understood that Hamas will emerge as the ruler of the combined, new entity, and that this inherently irredentist mini-state will eventually merge with a Muslim Brotherhood-ruled country in what is now the Kingdom of Jordan following the inevitable overthrow of the Jordanian monarchy, thus creating an Islamist Palestine on both sides of the river Jordan that will ultimately "liberate" all of Palestine--meaning, the destruction of Israel, whose very existence the conspirators regard as a historic "mistake" and the root cause of regional instability.
The Crucial Player
NATO-member Turkey, Obama's model Islamocracy, is a crucial player in the plot. Turkey's Prime Minister recently called for U.N. airstrikes on Israel. More important, Turkey is a major military power and a potential existential threat to Israel, especially given a scenario in which Israel would be forced to defend itself on at least two land fronts--i.e. against Egypt and Jordan/Palestine.
Like their Shiite Islamist Iranian rivals, Turkey's Sunni Islamist leaders have adopted an imperialist foreign policy--i.e. a policy that aims to overthrow a nation's power relationships with other nations, known as the status quo. But Turkish imperialism, in contrast with Iranian imperialism, is supported by the Obama administration. Having failed in their efforts to appease and align with Iran in order to pacify Afghanistan and the Middle East, Obama and his advisors are now bent on backing the emergence of an Islamist, neo-Ottoman Empire, hoping to use a Greater Turkey as both a bulwark against a nuclear-armed Iran and a sword against resurgent Russia and rising China and their strengthening ties--Obama's answer to the Shanghai Cooperation Organization. Political and overlapping organized and state Islam is the tool; the vast energy resources of Central Asia, the prize; countering Russia and dismembering China, by stirring rebellion among restive Muslims, priceless! (Click here to read more about this new version of the Great Game.)
The Unknown Factor
Syria is the unknown factor--a potential spoiler whose actions could actually facilitate and accelerate the conspiracy, causing its implementation in the coming months, as shocking as this may seem. With the fall of Libya's dictator, all eyes are on Syria's embattled despot. Turkey has hinted at intervening in the Muslim Brotherhood-backed, Sunni, majority, Syrian uprising against the hated, Iran-backed, Alawite (Shiite branch) minority, Assad regime; and Obama has explicitly called for Assad's resignation. When push comes to shove, Syria could attack Israel to get back at the United States and muddy the waters. Damascus and Tehran have already indirectly attacked Israel, using Egyptian Islamist and Gaza-based, Palestinian Islamist terrorists as proxies, in order to distract attention from the Syrian regime's atrocities and brutality. This year's cross-border, Nakba-Day riots were similarly orchestrated by Syria and Iran.
An Israeli response to a direct Syrian assault would most likely bring Iranian proxies Hezbollah and Hamas into the conflict, and, quite possibly, Iran, itself, which has repeatedly vowed to "burn Tel Aviv" and bomb Israel's Negev nuclear reactor. Should Israeli population centers come under heavy missile bombardment, crushing Israeli airstrikes against Gaza and Lebanese targets--missile launchers deliberately positioned in and around densely populated civilian areas--would almost certainly result in international condemnation of Israel (the only nation that is not allowed to defend itself) and thunderous calls for UN action against the Jewish State, setting the stage for another phony R2P intervention.
NATO against Israel?
It's a horrible thought. But history has time and again shown that the unthinkable can happen.
Related: The Iranian Plot to Destroy Israel
Copyright © 2011 Foreign Confidential™
Posted by Confidential Reporter at 12:06 PM