Now It Can Be Told: Jimmy Carter Allowed and Encouraged Anti-Shah Mob Violence Near the White House 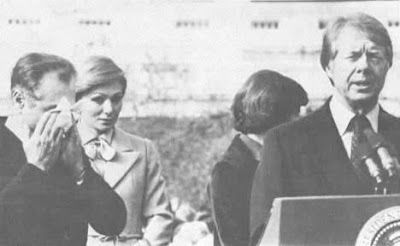 EDITOR'S NOTE: The following Foreign Confidential report on Jimmy Carter's betrayal of the Shah of Iran, originally published in April 2008, is reposted as a public service in light of the Obama administration-assisted ouster of Egyptian President Hosni Mubarak, embrace of the Muslim Brotherhood and Islamist Turkey, intervention in Libya in order to install an Islamist regime, etc. The mainstream media have naturally ignored the roles that Carter and his former National Security Advisor, Zbigniew Brzezinski, have played in influencing Obama's pro-Islamist foreign--and domestic--policies.

"Well, we couldn't stick with him."
-Former U.S. President Jimmy Carter responding to a question from CNN anchor Wolf Blitzer regarding his administration's policy toward the late Shah of Iran.

The catastrophic Carter administration once allowed and encouraged anti-Shah protesters to riot near the White House in order to embarrass and pressure the pro-American, modernizing monarch into making concessions to an unholy alliance of Marxists and Islamists that were actively plotting his overthrow.
Carter's Mastermind
President Carter's National Security Advisor, Zbigniew Brzezinski, was the mastermind behind the incident, which succeeded in undermining the Shah and emboldening and inspiring his foes. A Polish-born Cold Warrior consumed by hatred of the Soviet Union and obsessed by geopolitical strategic theories reminiscent of the Nazi era regarding the so-called Eurasian "super-continent," Brzezinski had exploited Carter's concern for human rights to turn him against the Shah and convince the President that the United States urgently needed to make friends with the "team of destiny"--political Islam--in order to keep oil-rich Iran's neighbor, the Soviet Union, at bay.
The Shah had no idea that Carter had turned against him. The Iranian monarch and his internationally admired Empress, Farah Diba, visited the Carter White House in November 1977. In a shocking betrayal that was seen around the world, the royal couple were greeted by nearly 4,000 Marxist-Islamist Iranian students, many wearing masks, waving clubs, and carrying banners festooned with the names of Iranian terrorist organizations. The rioters were allowed within 100 feet of the White House, where they attacked other Iranians and Americans gathered to welcome the Shah. To separate the Iranian factions, the police used tear gas, some of which wafted over the White House lawn just as Carter was formally welcoming the Shah. The gas settled, causing the high-ranking figures to cry, wheeze, and cough. Televised images of the two heads of state wiping tears from their eyes were widely distributed and noted in Iran and across the Middle East.
Full-Court Press
Carter and Brzezinski and other US officials met with the Shah, his ambassador to Washington, Ardeshir Zahedi, and other members of the Iranian delegation for 90 minutes. The subsequent White House communique did not reflect what transpired at the meeting--a full-court press by the US for radical reform.
Back in Iran, when the head of SAVAK saw a videotape of the incident, he concluded that the U.S. had abandoned the Shah. The secret police chief then proceeded to betray the Shah by making a secret deal with his implacable foe, the Ayatollah Ruholla Khomeini, whose forces drove the Shah from power two years later.
Brzezinski's "Washington tears," as the incident became known, had achieved its aim.
Posted by Confidential Reporter at 11:17 AM