N. Korea Claims its Mobile Weapons Can Defeat US 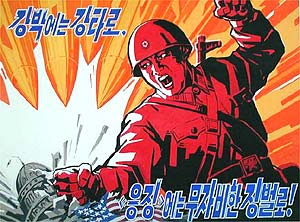 North Korea claims to have "mobile weapons" capable of defeating the United States "at a single blow." Click here for the story. [NOTE: urgent update added below at 1:37 PM EDT.]

The boast could refer to a covert, electromagnetic pulse (EMP) strike capability. North Korea and Iran are believed to have jointly developed and tested systems for launching conventional and nuclear-tipped missiles from cargo ships in order to attack a coastal city or, in an EMP assault scenario, to detonate a nuclear warhead high above the targeted nation. An explosion of this kind could in a flash wipe out all electronic and communications systems and plunge the United States back into the pre-electric, early 19th Century--without that era's infrastructure and resources. As one columnist who has written about the EMP threat has noted:


The resulting electromagnetic pulse effect … could knock out most of our computers and electronics, shutting down the electric grid system and leaving us without power, light, heat, water, transportation and most agriculture. The chairman of the congressionally authorized EMP Commission estimated 70 to 90% of our entire population would die from starvation and disease within one year.

There is no known land defense against such a sea-launched missile attack. Thousands of cargo vessels flying flags of convenience regularly approach U.S. coastal waters. It is not inconceivable that North Korea and Iran may have already deployed a fleet of freighters equipped with the deadly weapons and launch pads--concealed in seemingly ordinary shipping containers. Some of these vessels could even be lurking offshore as of this writing; hence, the continued defiance and apparent absence of fear on the part of the world's foremost partners in nuclear and missile crimes. Commenting on their brazen threats in March 2007,  Foreign Confidential™ (then China Confidential) reported that Iran and China


are suspected of illegally acquiring Soviet-era Russian cruise missiles via Ukraine and perhaps Pakistan and successfully reverse engineering and further developing the technology with the assistance of North Korea.

Cruise and other missiles could be launched from a number of different offshore platforms or basing systems that would give citizens in coastal cities almost no warning before impact….

Some 75% of the US population lives within 200 miles of the US coastline. Nuclear-tipped missile strikes could cripple the country. The destruction caused by a nuclear warhead detonating in the air over the nation's capital would make the 9/11 attacks look mild by comparison.

The Foreign Confidential™ article went on to describe the most plausible sea-based attack scenarios:

(1) SCUD-IN-A-BUCKET: Foreign flagged commercial ships could carry Russian designed Scuds or Chinese Silkworm cruise missiles for easy launch from international waters. Some types of dry cargo ships could launch the missiles from their holds. A container ship could conceal a missile and launch mechanism in an innocent looking shipping container on top of its deck before authorities even knew that an attack was in progress. Iran and North Korea have successfully test-fired Scuds from cargo ships. And the US itself experimented with the technique back in the early 1960s.

(2) CANISTER-LAUNCH: The Soviet Union developed this technique during the Cold War. It involves placing a ballistic missile in a sealed tube and dropping it in the sea from the deck of a commercial vessel. The bottom of the tube, sealed off from the missile, is weighted with ballast to achieve a specific level of buoyancy to ensure that the nose of the missile points up just enough to barely break the sea’s surface. After an interval to allow the mother ship to move on--and maybe drop off other encapsulated missiles--the rockets could be remotely launched or fired by timers and guided to their targets by the ship's commercial GPS system. 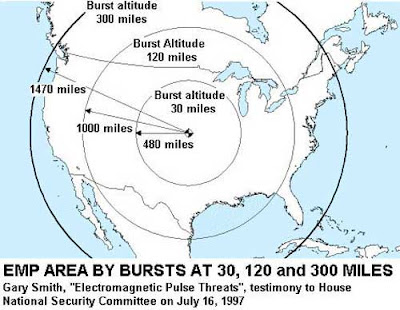 UPDATE: The North Korean warning coincides with the publication by Asia Times of a long essay by Pyongyang's unofficial spokesperson in Japan, Kim Myong Chol, which includes a chilling EMP threat. "Whether the Americans are aware of it or not," Kim warns, "the US faces two worst-case scenarios in a showdown with the administration of Kim Jong-eun: One is the prospect of finding their skyscraping metropolitan centers bombed back to the Stone Age and vaporized in a consuming thermonuclear exchange. The other is a certain prospect of nine of ten Americans dying in a swift retaliatory EMP strike to be launched by North Korea." This may be the first-ever EMP threat by North Korea against the United States--with an added threat against Japan: "Supreme commander Kim Jong-eun may be tempted to single the Japanese archipelago out as the first testing site for EMP bombs for the Americans to see the extent of its destructiveness."

Posted by Confidential Reporter at 7:34 AM