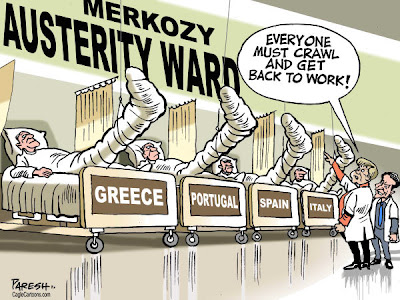 May 9 is Europe Day, a celebration of the European Union. This year, there seems to be little to celebrate as the Continent rebels against failed--fatally flawed, actually--austerity measures that have deepened an economic crisis and fueled political instability and extremism.

Austerity programs drive weak economies directly into recession. It's just that simple. And that's exactly what's happening in Europe. So far, 12 of Europe's 27 nations have fallen into recession. Spain and Britain are only the two most recent states to join that list, while several others are teetering. And if the tea-party types in Washington have their way, that's exactly what will happen here.

With Sarkozy's loss, 11 European heads of state have been driven out of office largely because they embraced austerity programs. The Dutch government just fell over a proposed austerity plan.

In Europe right now, the continent-wide unemployment rate stands at 10.9 percent -- the highest in 15 years. In Spain, the "leader," 23.6 percent are unemployed. As serious as those problems are, they aren't the only ones. Across southern Europe, primarily, dozens of people who have fallen into economic desperation are shooting and hanging themselves. Authorities have recorded scores of suicides.

Others are holding vast, angry rallies, like the ones across Europe on May Day. All of that certainly shattered still another of the Germanic arguments for austerity: to build confidence in the nations and their economies. That one clearly isn't working.

In fact, as Joseph Stiglitz, the Nobel Prize-winning American economist, aptly put it recently, "Europe is heading to a suicide" because "there has never been any successful austerity program in any large country."

The United Nations' International Labor Organization, in a new report, predicts that 6 million more people worldwide will lose their jobs by year's end -- "primarily in Europe" because "the narrow focus of many Eurozone countries on fiscal austerity is deepening the job crisis."

Francois Hollande, the French president-elect, is calling for what he calls "growth" policies instead. Generally that means spending stimulus money (as the Bush and Obama administrations did in the U.S.) so that the economy will grow and begin producing more tax revenues that can then be used to pay down the debt….

In Europe, German Chancellor Angela Merkel still refuses to accept that her policy prescription has been a cataclysmic failure. On Monday she insisted that "the fiscal pact" calling for austerity "is not negotiable."

Certainly, domestic politics are helping define her position. But millions are suffering; scores are dying. In Berlin, and Washington, it's time to wake up, look around and change your stance.

Austerity is being imposed on southern Europe by the Germans and is being supported by the international banks, including the European Central Bank. It is a disaster. Most observers now recognize that austerity is pushing these countries deeper and deeper into recession.

In Spain, the unemployment rate is 25 percent, and among those under 25 years of age it is 50 percent. We do not want to go there.

Europe has a problem, but it is not overspending, and austerity is not the solution. The deficits in Ireland, Spain, Portugal and to some extent Italy arose as a result of the financial crisis and the subsequent depression.

The normal cure for this is for a country to print money, lower the value of its currency and thereby increase exports, decrease imports and stimulate growth. This is a tried-and-true solution but an option that is not available as these countries do not have their own currency. When they joined the euro, they gave up the right to manage their economies using fiscal policy, and they set up no coordinating mechanism.

Iceland and Britain, though they were in worse financial shape than Spain and Portugal, do not have a problem because they still have their own currency.

Read all about "the Austerity Trap" here. An excerpt:

In countries that have pursued austerity and deregulation to the greatest extent, principally those in Southern Europe, economic and employment growth have continued to deteriorate. The measures also failed to stabilize fiscal positions in many instances. The fundamental reason for these failures is that these policies--implemented in a context of limited demand prospects and with the added complication of a banking system in the throes of its “deleveraging” process--are unable to stimulate private investment. The austerity trap has sprung. Austerity has, in fact, resulted in weaker economic growth, increased volatility and a worsening of banks’ balance sheets leading to a further contraction of credit, lower investment and, conse- quently, more job losses. Ironically, this has adversely affected government budgets, thus increasing the demands for further austerity. It is a fact that there has been little improvement in fiscal deficits in countries actively pursuing austerity policies.


Posted by Confidential Reporter at 2:16 PM